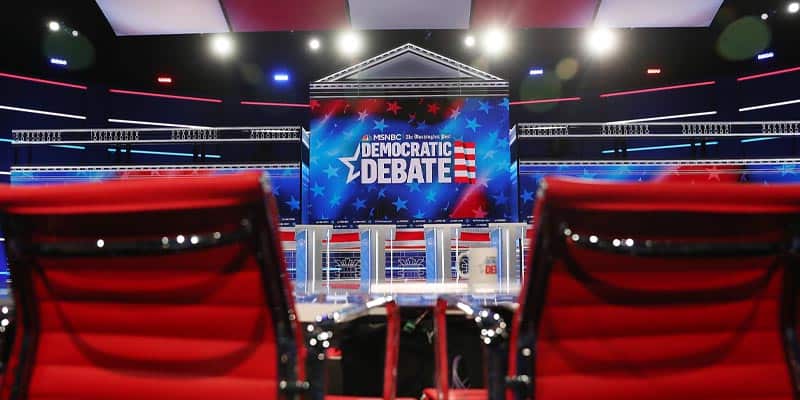 The stage is officially set for the 2020 Democratic presidential primary debate in Los Angeles on Dec. 19.

Seven candidates have qualified as the lucky winners under the Democratic National Committee (DNC) requirements for the sixth debate.

With the fewest number of individuals on stage so far this primary season—10 debate candidates were the previous low—the POLITICO/PBS NewsHour debate could provide a significant boost to the seven candidates’ 2020 Democratic nominee betting odds.

The following candidates will be on the UCLA Luskin School of Public Affairs debate stage next Thursday.

Apart from Steyer and Klobuchar, the 2020 Democratic primary race is extremely tight among the top five contenders, according to the oddsmakers at BetOnline.

Here’s a look at the betting odds converted to an implied probability for each of the candidates who’ve qualified for the sixth Democratic debate.

There’s roughly a 10% difference to win between Biden, the favorite, and Yang, the fifth of the candidates with a double-digit chance of becoming the Democrat Party’s nominee.

The deadline to qualify for the sixth debate was 11:59 p.m. ET on Dec. 12. Candidates needed to reach 1) 200,000 unique individual donors, with a minimum of 800 donors from at least 20 states and 2) 4% support in four national or early-state polls or 6% support in two early-state polls from DNC-approved polling organizations.

Kamala Harris qualified for the debate but won’t be attending after ending her 2020 campaign at the beginning of December.

Tulsi Gabbard nearly qualified but came up one qualifying poll short. Cory Booker and Julián Castro both met the individual unique donor threshold but did not receive a qualifying poll following the November debate.

Michael Bloomberg, who’s spent over $100 million on TV advertising in three weeks, can’t qualify for any debate stage since he is not accepting donations from individuals.

December debate prop bets have yet to be released by the political betting sites, but we expect to see those lines posted sometime next week. For now, here’s where all the Democrats currently sit on the odds board.