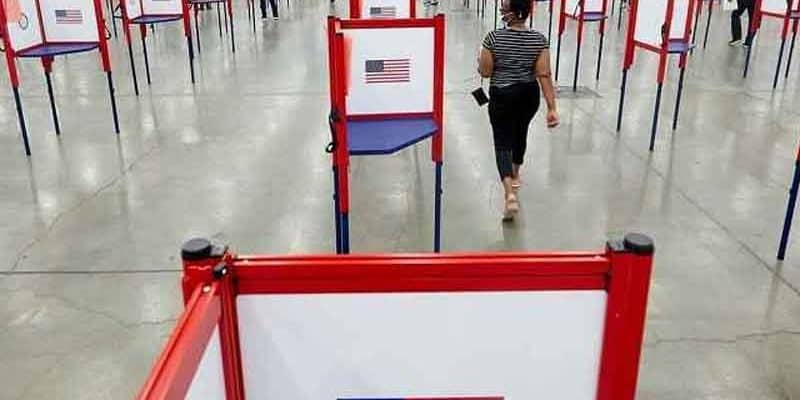 One hundred million Americans have already cast their vote for the next President of the United States. Officials expect millions more at the ballots today. The close attention the election gets reflects high action on the Presidential election odds in the sportsbooks. First, what can we expect this election day?

This election day, Americans appear to brace for the worst. Countless news segments discuss the dangerous possible fallouts of the 2020 election. Plus, I have had too many friends who casually predict the end of the world. One friend’s mom went so far as to advise her to stock up a week’s worth of food and supplies.

While some people admittedly drank the Kool-Aid this election cycle, it’s chilling to see some fears become justified. In D.C., George Washington University students received emails from the dean warning them to treat election day as a hurricane or a snowstorm. The White House has a fortified fence with 600 National Guard Troops deployed outside.

And plywood lines the storefronts around Capitol Hill. Hold on, wait…plywood? Elections? Shouldn’t the nation’s capital embody the rituals and symbols of a healthy democracy? There’s nothing like the normalization of plywood into a city’s architecture to remind us that chaos and order fulcrum on a peaceful transition of power.

But what’s happening this election day? Some sources report small confrontations between voters or scenes like Trump supporters blocking a major highway in NJ. In some sources, rumors of militia violence circulate. For the most part, however, Americans are casting their votes peacefully.

A good part of the uncertainty lies not in physical confrontations but also in the courtrooms’ verbal confrontations. Throughout the country, local and state courts are locked in litigation battles over the nature of vote counting, and the plaintiffs and defendants comprise GOP and DNC actors.

Trump’s coalition of lawyers fighting these battles includes a regular cast of characters such as Rudy Giuliani and Pam Bondi. The GOP’s joint effort with the Trump administration calls their campaign “Protect the Vote.” The Republicans claim that Democrats are using the coronavirus to implement nation-wide mail-in voting and break down the safeguards to a fair election.

Along with the DNC, Biden has their team of lawyers, including former Attorney General Eric Holder. The Democrats claim that the Republicans are trying to disenfranchise voters by opposing safety measures that accommodate many mail-in votes this election cycle.

Both sides point the finger, blaming each other for trying to push the election in their favor. The heart of the argument lies in whether or not you believe the pandemic (ostensibly the reason for large amounts of mail-in votes) was enough of an extant shock to the socio-political system to justify measures of ballot harvesting and deadline extensions.

The Trump administration claims mail-in voting is prone to fraud, although no significant misdeeds have been reported.

In two key swing states, Pennsylvania and North Carolina, state courts have already ruled on extending deadlines for accepting mail-in votes. Meanwhile, states like Maine have ruled against such measures.

These state battles reflect the possible legal action on the federal level. Trump made claims about demanding an election won by the end of today, but recently also stated on a Fox News phone call that he’s going to wait for a winner if there’s a winner and that there is no reason to play games.

Currently, North Carolina, Ohio, and Florida’s actual toss-up elections hold the key for a clear path to 270 for both candidates. The odds on those swing states all favor a Republican victory. Polls and moneylines still show a slight national Biden favor, but with razor-thin margins.

On the bright side, the longer this goes on, the more opportunity’s sportsbooks have to drop new lines. The books close the lines on the Presidential election odds today. Make sure to get all of your last-minute wagers in while you can.