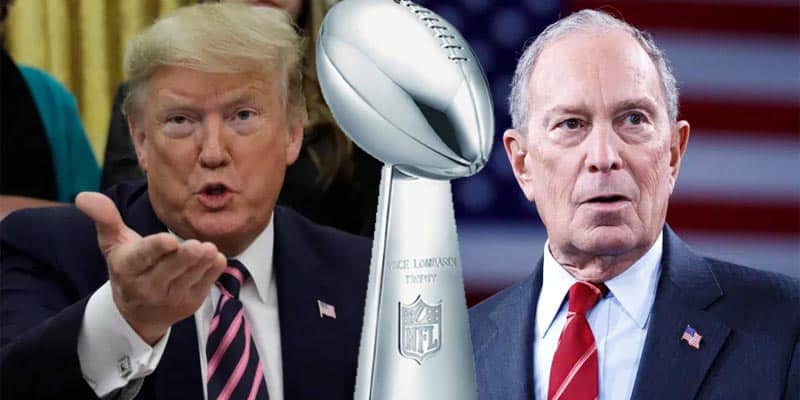 If there was ever a year to combine betting on the presidential election and Super Bowl wagering into one event, then look no further than 2020.

Following the conclusion of the NFL conference championship games this past Sunday, oddsmakers opened the Kansas City Chiefs as a 1.5-point favorite over the San Fransisco 49ers for Super Bowl 54 in Miami, FL, on Feb. 2. The Chiefs-49ers total is currently hovering around over/under 54.

Along with listing the betting line for the biggest game of the NFL season, online sportsbooks have a habit of posting hundreds, if not thousands, of prop bets for the Super Bowl each year.

Props for Super Bowl Sunday traditionally include the odds on the coin toss result, length of the national anthem, the first song performed during halftime, and the color of Gatorade poured on the winning coach, among many other mainstays.

However, this year is special because political betting on Super Bowl 54 prop bets is now a reality.

Currently, there are are more than a dozen Super Bowl prop bets on two of the 2020 candidates: President Donald Trump and former New York City mayor Michael Bloomberg.

In case you missed it, Trump and Bloomberg each spent $10 million their one-minute-long ad buys, marking the first time any presidential campaign will air a nationwide commercial for the Super Bowl.

Because the two high-profile billionaires will battle it out during the Super Bowl commercials, oddsmakers have included over a dozen political prop bets on which ad will air first and what the ads will say when the 60-second spots air in front of over 100 million viewers.

Odds on whether Trump congratulates the winning team on Twitter and how much he tweets on Feb. 2 are just some additional political Super Bowl prop bets available.

At this point in the 2020 race, Trump’s reelection odds indicate he’s the betting favorite at -130, which means the Republican incumbent currently has an approximately 56.52% chance of winning a second term.

Bloomberg’s presidential odds are much longer since it’s unclear whether his strategy to skip the early states and flood the Super Tuesday states with $200+ million worth of TV/radio ad buys will earn him the Democratic nomination.

Nevertheless, Bloomberg is currently listed at +1600 odds, giving him roughly a 5.88% implied probability of winning the White House in the Fall.

Here is a list of the Super Bowl 54 prop bets that involve Trump and Bloomberg, two of the 2020 presidential candidates. We’ve separated the proposition wagers based on which sportsbook has them posted.

Which 2020 Campaign commercial will appear first?

Will Trump attend the Super Bowl?

How many times will @realDonaldTrump tweet on February 2nd?

Which will be higher?

Will Trump call the winning coach after the game?

Will Trump sing along to the national anthem?

Will Trump predict the winner before kickoff?

Will the winning team visit the White House?

How many times will Bloomberg’s commercial say “Trump”?