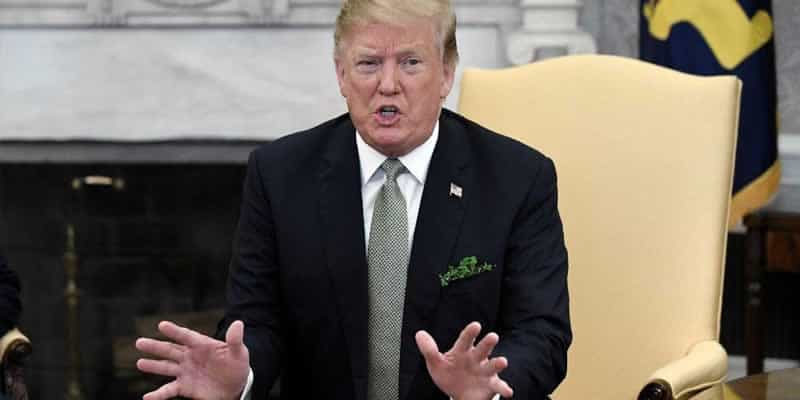 The President got angry with 12 Republican men and women this afternoon for voting against his biggest campaign promise.

The Senate voted 59-41 in favor of the bill that would block the national border emergency declared by President Donald Trump (+230|30.30%), which he said he used to keep his campaign promise and to secure funds “much faster” to build a wall alongside the U.S.-Mexico border.

Lawmakers from both sides of the aisle said Trump’s national emergency declaration to fund his border wall was an abuse of power by the executive branch, undermines the legislative process, and is unconstitutional.

Trump wasted no time and immediately made his intentions known Thursday afternoon, tweeting “VETO!” after the bill was passed by the Senate.

With both the House and the Senate overwhelming voting in favor to pass the bill, the measure now heads to the Oval Office where it sets up the first veto from Trump since being sworn in as President a little over two years ago.

Trump turned to Twitter again a bit later, saying that he looks “forward to VETOING the just passed Democrat inspired Resolution” which he believes “would OPEN BORDERS while increasing Crime, Drugs, and Trafficking in our Country.” He then thanked all the Republicans who voted against the bill.

I look forward to VETOING the just passed Democrat inspired Resolution which would OPEN BORDERS while increasing Crime, Drugs, and Trafficking in our Country. I thank all of the Strong Republicans who voted to support Border Security and our desperately needed WALL!

The Democrat-controlled House of Representatives passed the resolution 245-182 to block Trump’s border emergency declaration on Tuesday, Feb. 26, where only 13 Republicans voted in favor of the bill.

The bill then advanced to the Republican-controlled Senate, and it was unclear whether the measure would advance to the President’s desk. However, earlier this week, a few Republican senators came out and publicly stated that they would vote in favor of the bill. Only 4 Senators from Trump’s own party was needed to block his declaration.

It’s unclear at this time how much this will affect Trump’s odds of re-election in 2020, but if the surveys conducted recently are any indication, Americans are overwhelmingly opposed to his national emergency declaration to fund his border wall.

Last month, the Washington Post reported an NPR poll found that 61% of Americans disapprove of Trump’s national emergency declaration compared to only 36% who approve. Americans also said 58% to 39% that they do not think there is not a national emergency happening at the U.S.-Mexico border.

Perhaps most importantly, however: 63% of Independents said they oppose the declaration, and 54% of all voters said Trump’s declaration makes them less likely to vote for him during the 2020 presidential election.

Trump now has 10 days (excluding Sunday) to sign the bill. If he doesn’t sign the bill, it will be vetoed and will be sent back to Congress.

A two-thirds majority is needed to pass a law without the President’s signature, which means if 290 members of the House and 67 Senators vote in favor of the measure, then it would become law and Trump’s national emergency declaration would be overturned.