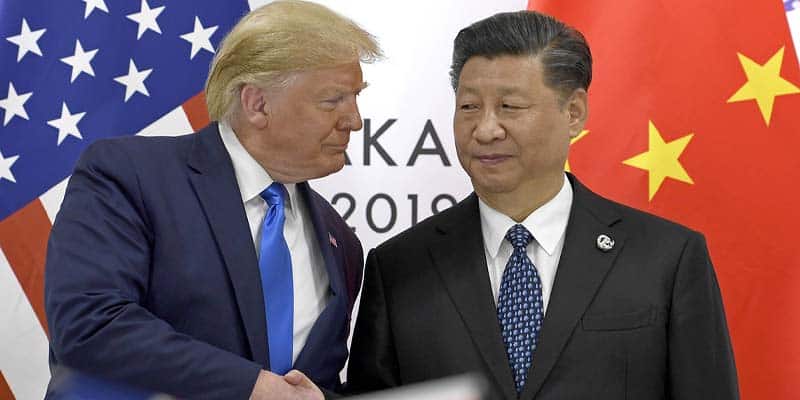 If at first you don’t succeed, publicly ask another foreign government to dig up dirt on a political opponent?

Despite the impeachment odds for Donald Trump seeing no movement this week—Yes (+175) still remains less likely than No (-250)—the President called on another foreign government to investigate the Bidens outside the White House on Thursday.

“China should start an investigation into the Bidens because what happened in China is just about as bad as what happened with Ukraine,” Trump told White House reporters today.

Trump added that it’s “certainly something we can start thinking about, because I’m sure that President Xi does not like being on that kind of scrutiny, where billions of dollars is taken out of his country by a guy that just got kicked out of the Navy.”

“He got kicked out of the Navy, all of the sudden he’s getting billions of dollars,” he said. “You know what they call that? They call that a payoff.”

It’s worth noting the current impeachment inquiry against him resulted from his phone with another foreign leader, Ukrainian President Volodymyr Zelenskiy, where a whistleblower complaint alleges Trump withheld tax-funded military aid to launch an investigation against former Vice President Joe Biden and his son, Hunter Biden.

And Trump refuses to back down, stating today that he wants to double down and have the Ukraine launch “a major investigation” into the Bidens lucrative business dealings with the foreign ally.

“I would think that if they were honest about it, they would start a major investigation into the Bidens,” Trump said. “They should investigate the Bidens.”

And while Trump has yet to contact President Xi directly, the United States is still in the middle of a trade war with China, and

Today’s public request for another foreign government to investigate a political opponent comes just days before Chinese officials are scheduled to arrive in Washington D.C. next week to negotiate an agreement between the two countries.

When reporters asked Trump today about the meeting and the possibility of making a deal to end the trade war, the President bluntly stated, “if they don’t do what we want, we have tremendous power.”

While Trump’s 2020 reelection odds have slipped to +120 odds, a 45.45% chance, recently—falling from his previous high of -110 odds, 52.38% chance—the incumbent Republican nevertheless remains the favorite to win next year’s general election.

However, Massachusetts Senators Elizabeth Warren has seen a surge from +3300 odds, 2.94% chance, over the Summer to her current +275 odds, 26.67% chance, which leads all the Democrats that Trump could potentially face next year.