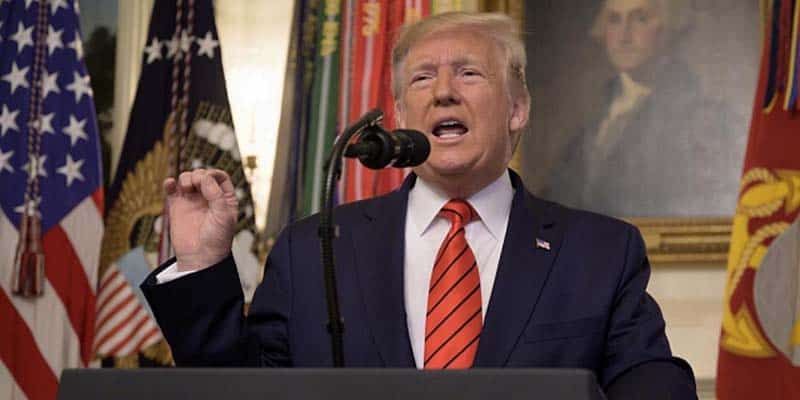 In a shock to Americans on Sunday–and House Democrats, to their chagrin–President Donald Trump announced the death of Abu Bakr al-Baghdadi.

Born Ibrahim Awad Ibrahim al-Badri, the Iraqi-native was the leader of the Islamic State of Iraq and the Levant, also known as ISIL or ISIS.

Something very big has just happened!

On Sunday, the official White House Twitter live-streamed Trump announcing the death of the ISIS leader.

“He died like a coward,” Trump said of Baghdadi. “He was whimpering, screaming, and crying.” According to Trump, Baghdadi “spent his last moments in utter fear, in total panic and dread.” After a military dog chased Baghdadi and three children down a tunnel.

Reaching a dead-end, Baghdadi detonated his suicide vest to kill himself, the children and injured the canine.

Trump decided not to inform House Democrats of the mission, citing the likelihood that the information would leak before the mission’s completion.

“They were talking about why didn’t I give the information to Adam Schiff and his committee and the answer is I think Adam Schiff is the biggest leaker in Washington,” Trump said. “We all know that. I’ve watched Adam Schiff leak. He’s a leaker like nobody’s ever seen before.”

Normally, the White House will inform select lawmakers, known as the Gang of Eight, surrounding classified intelligence matters. The gang includes the House speaker, minority and majority leaders of the House and Senate, plus the chairs and ranking members of both chambers’ intelligence committees.

House Speaker Nancy Pelosi, responding to being left in the dark, said the White House should have informed Congress because allies of the United States “deserve strong, smart and strategic leadership from Washington.”

Pelosi also accused Trump of informing Russia of the raid before Congress. In his White House remarks, Trump only stated that Russia was informed that the US military would be flying over Russian-controlled areas.

Since Baghdadi’s death, Trump’s impeachment odds have crept closer into his favor. Last week, the impeachment odds fluctuated between -185 and -170. Today, the chances that Trump is impeached during his first term are only -145.