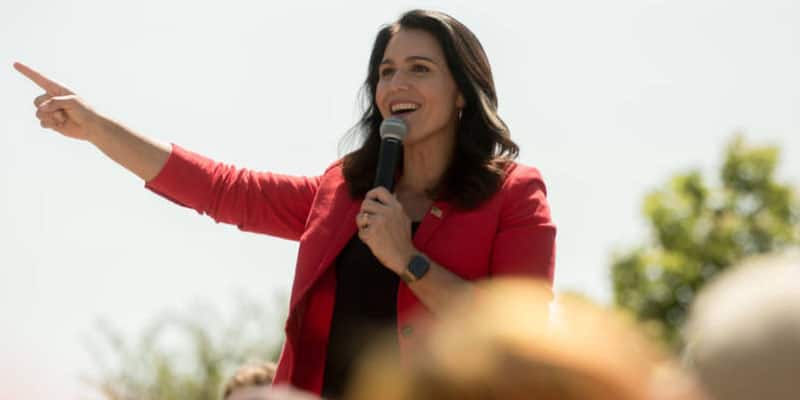 Guess who’s back, to clap back again?

Tulsi’s back, tell a Democrat.

The DNC, media created a monster.

Well if you want Warren, this is what she’ll give ya.

A little bit of a plan mixed with a vague answer.

‘Cause she’s back on the stage and operating.

I know that you got a job, bros for Bernie.

So the DNC won’t let Tulsi be.

Or let Tulsi be the nominee so let me see.

Media tried to shut her down on Google and TV.

But it feels so empty without Tulsi.

So everybody just watch the campaign killer.

‘Cause we need a little controversy.

‘Cause a debate feels so empty without Tulsi.

Thanks, Dem Shady, but I’ll take it from here because we gotta snap back to reality and get on with the news.

After announcing on Thursday that she was considering boycotting the fourth Democratic debate, Hawaii Representative Tulsi Gabbard tweeted out that’d she’d be on the stage in Ohio tomorrow night.

I will be attending the debate.

Last week, Gabbard said she was considering a boycott after claiming the DNC and corporate media were attempting “to replace the roles of voters in the early states, using polling and other arbitrary methods which are not transparent or democratic, and holding so-called debates which are not debates at all but rather commercialized reality television meant to entertain, not inform or enlighten.”

“In short, the DNC and corporate media are trying to hijack the entire election process,” she said in her press release, drawing comparisons to how Vermont Senator Bernie Sanders was treated in the 2016 Democratic Primary.

Tulsi’s Odds To Be The Democrat Nominee

Gabbard’s Democratic nominee odds remain the same as a week ago and currently sit at +3300, a 2.94% chance, which put her in 8th place heading into tomorrow’s debate in Ohio.

When looking at all the odds for the 2020 Democratic Nomination, Massachusetts Senator Elizabeth Warren leads the way with -120 odds, indicating that she has approximately a 54.55% chance to win the Primary.

Debate prop bets were not available at the time of writing, and we’re expecting to see dozens posted sometime tonight or tomorrow. For now, here are the latest odds for the Democrat contenders.