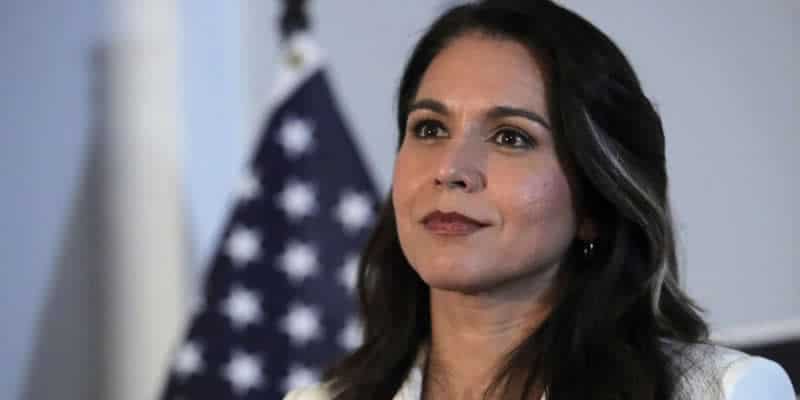 Tulsi Gabbard Blasts The DNC And Media, May Boycott The October Debate

Aloha, Ohio! But could this be a goodbye instead of a hello?

It may be after Hawaii Rep. Tulsi Gabbard announced on Twitter Thursday that she is considering boycotting the Democratic Primary debate in Ohio on Tuesday, October 15.

I am seriously considering boycotting October 15 debate to bring attention to DNC/corporate media’s effort to rig 2020 primary. Not against Bernie this time, but against voters in early states Iowa, New Hampshire, South… –> https://t.co/x5P3GFGbyn pic.twitter.com/UgKCj6DGI0

Gabbard states her reason is that she wants to bring attention to the corrupt attempt by the Democratic National Committee (DNC) and major corporate media networks to rig the 2020 Democratic Primary Election.

In a press release on her official campaign website, Gabbard cites how Vermont Senator Bernie Sanders did not get a fair shake back in 2016 and said the DNC and the corporate media are rigging the election this time “against the American people in the early voting states of Iowa, New Hampshire, South Carolina, and Nevada.”

In addition, Gabbard states the DNC and corporate media are working together in an attempt “to replace the roles of voters in the early states, using polling and other arbitrary methods which are not transparent or democratic, and holding so-called debates which are not debates at all but rather commercialized reality television meant to entertain, not inform or enlighten.”

“In short, the DNC and corporate media are trying to hijack the entire election process,” she said.

The Hawaii representative didn’t meet the requirements set by the DNC for the September debate but became the 12th Democratic candidate to qualify for the October debate two weeks ago.

Gabbard says she will make her decision on whether to attempt next week’s debate in the coming days.

Marianne Williamson, who didn’t qualify for either the September or October debate, tweeted out her support for Gabbard and shining light on the issue.

I have great respect for Tulsi for saying such inconvenient truth. She is absolutely correct. https://t.co/HDRV5avPMO

The topic of the DNC’s debates being “commercialized reality television” to entertain rather than inform is something New York entrepreneur Andrew Yang, who’s qualified for every Democratic debate, remarked on during his closing statement in the July debate.

“We’re up here with makeup on our faces and our rehearsed attack lines, playing roles in this reality TV show,” Yang said during the second debate on CNN. “It’s one reason why we elected a reality TV star as our president.

Gabbard’s odds of winning the Democratic Nomination have dipped very slightly over the past couple of weeks.

If Gabbard does decide not to attend, it’d be disappointing since she’s proven to be a fierce debater who effectively killed Kamala Harris’ chances last time she was on the stage.

And with Elizabeth Warren now leading the pack, there was a possibility of the Hawaii representative targeting her record next week.

But perhaps more importantly: If she doesn’t attend, then the Democratic Nomination betting market will wager on other candidates since they’ll see Gabbard having less of a chance at swinging voters on the national stage.

Hopefully, Gabbard will reconsider. After all, what better way would there be to expose the DNC and the corporate media than on the debate stage with tens of millions of people watching from home.

And let’s not forget: If Gabbard is on the stage, we could be in for some spicy Democratic debate prop bets—and that’s something I think we’d all vote for.