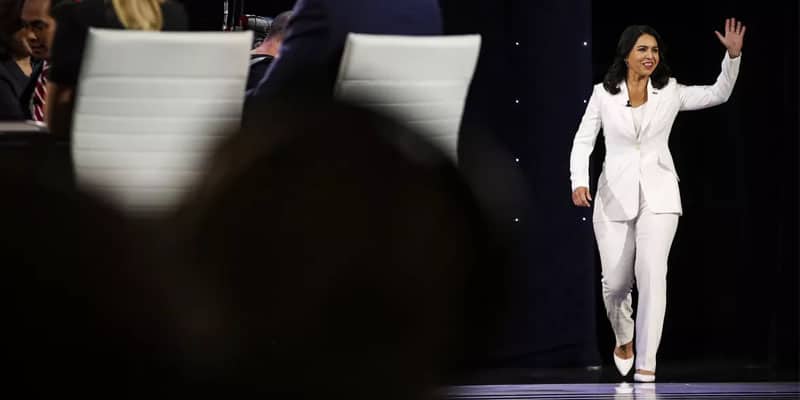 It’s quite the past few days for Gabbard, who just last week only had two qualifying polls with her at 2% or higher and needed two more to get on the stage alongside the other 11 Democrats. She had already met the required 130,000 individual donor threshold in early August.

And today, the Hawaii Representative got her fourth when the latest New Hampshire poll from Monmouth University showed her polling at 2% in the Granite State. The September results from NH poll (along with the May results in parentheses) are as follows:

Despite missing the cut for the third Democratic debate—and not receiving any Presidential debate prop bets as a result—the congresswoman is no doubt a fierce, no-nonsense debater, and she’s someone the other Democrats will need to watch out for on the stage next month.

Gabbard has been the most-searched candidate on Google during her debate performances, but you don’t even need to do that to be assured of her presence on the stage.

Just ask Kamala Harris, who was riding high and polling only behind Biden after a strong first debate.

But during the second debate, Gabbard absolutely shredded Harris, ripping her record that includes the Senator—when Attorney General of California—putting over 1,500 people in jail for marijuana violations and then laughed about smoking it herself, blocking evidence that would have freed people on death row, and keeping people in prison beyond their sentences to get cheap labor for the state.

“The bottom line is Senator Harris, when you were in a position to make a difference and an impact in these people’s lives, you did not,” Gabbard said when calling out Harris’ record. “And worse yet, in the case of those who were on death row, innocent people, you actually blocked evidence from being revealed that would have freed them until you were forced to do so.”

“There is no excuse for that,” Gabbard added. “And the people that suffered under your reign as prosecutor, you owe them an apology.”

Harris tried to laugh it off, but the damage was done. And after the debate, the Senator did not do herself any favors when she—instead of defending her record—took shots at Gabbard’s lower polling numbers with a child-like arrogance.

“I’m obviously a top tier candidate and so I did expect that I would be on the stage and take hits tonight,” said Harris. “I’m prepared to move on.”

And in case you—or Harris, if you’re reading this—forgot what happened, then here’s how the exchange went down between the two.

While Harris has seen her polling numbers and 2020 Presidential Election odds plummet after that second debate, Gabbard got a significant boost from the oddsmakers following her performance.

Even though she wasn’t on the stage in September, Gabbard’s odds for both the Presidency (+5000) and the 2020 Democratic Nomination (+2500) have not dipped in the slightest despite not seeing her in the national spotlight in almost two months.

A full list of the latest odds to win the 2020 Democratic Nomination can be found in the Political Futures section at the BetOnline Sportsbook.

The fourth debate will be held at Otterbein University in Westerville, Ohio, and will be co-hosted by CNN and The New York Times.

The now 12-candidate debate is currently scheduled for one night on Tues., Oct. 15, but the Democratic National Committee has stated it may split the candidates onto two debate stages “if needed.”

If DNC decides an extra night is needed, then night two of the Ohio debate will be held on Wed., Oct. 16.