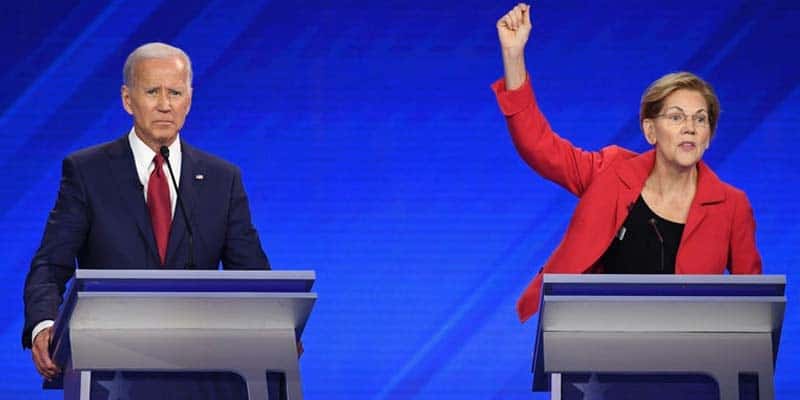 Today is the first day of Autumn, but Joe Biden’s Fall began over the weekend.

Elizabeth Warren has moved firmly into frontrunner status for the Democratic presidential nod, finally eclipsing Biden in a meaningful poll – and an Iowa poll, at that.

That’s particularly significant given the fact that the Iowa caucuses are the traditional marker for a candidate’s wider national success on the primary campaign trail. For Warren to be leading Biden in Iowa is a huge momentum shift for her campaign, which began rising at the start of Summer.

Saturday’s poll – sponsored by the Des Moines Register, CNN, and Mediacom and conducted by Selzer & Co. – shows Warren pulling 22 percent of respondents, while Biden is at 20 percent.

Of course, Warren has been leading Biden on the Democratic primary odds boards for some time, so the new polling isn’t much of a shocker for those who’ve been paying attention to the bettors and bookmakers.

Below, you’ll find the latest betting odds for the DNC candidates, with their previous odds in parentheses.

As recently as late last week, Bovada had Warren leading Biden by 100 points, sitting atop the boards at +175 to Uncle Joe’s +275. Now, by taking the lead in Iowa for the first time, Warren’s Democratic nomination odds have improved to +150, though Biden’s remain unchanged.

Meanwhile, Andrew Yang’s odds now place him fourth among Democrats, with his odds are trending steady at +1000 (though he’s still polling at just two percent per the latest Iowa data).

While it looks like Warren will continue to rise, she’ll need to continue to face the most important question, according to Democrat voters: “Can she beat Donald Trump?”

In addition to that, the senator from Massachusetts will need to convince moderate voters of her plan to eliminate the country’s reliance on coal and gas by 2030 and whether that timetable is realistic.

Along with those questions, perhaps the biggest for her campaign is her platform of Medicare For All.

With other Democrats seeing Warren’s rise in the polls—and especially with her now leading in Iowa—her opponents have begun to take aim at her campaign’s focal issue, which would eliminate private insurance and have the federal government provide health coverage to all people residing in the United States.

Warren has stated that health care costs will go down for the average middle-class family but has noticeably and repeatedly avoided answering whether her proposal will raise taxes on the working class.

Of course, should she win the Democratic nomination, her opponent will not be without his own issues, but Trump’s latest controversy could be playing a role in part in torpedoing Biden’s primary chances, giving Warren the edge in the latest polls.

Whether or not that was Trump’s intent all along remains to be seen, but it could be a cause for concern for Democrats—and all Americans—if the president is manipulating the tournament seeding, so to speak.