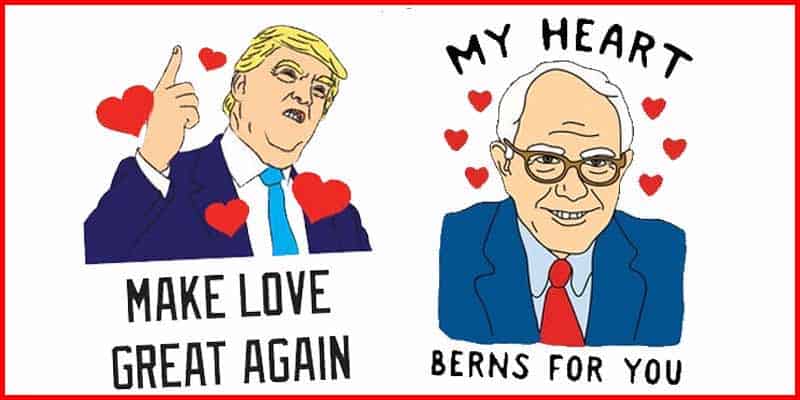 Voters across America will head to the polls on Nov. 3 for the general election, but the names on the ballot have yet to be determined.

The nominee from Democrats and Republicans won’t be officially decided until the party’s national conventions are held during the summer. Still, the 2020 presidential election odds on Valentine’s Day show two candidates getting the most love at the online sportsbooks.

At this point in the race, the oddsmakers at Bovada heavily favor President Donald Trump, the Republican incumbent, and Vermont Sen. Bernie Sanders, the Democratic frontrunner, going toe-to-toe heading into this fall’s election.

Trump’s reelection odds list him as the overall betting favorite at -180 ($180 bet wins $100), which gives the sitting President an implied probability of 64.29% to win enough love and earn a second term in office.

Due to his incumbent status, it’s no surprise Trump is a massive favorite to become the eventual GOP nominee, according to the current Republican presidential nominee odds.

Trump is listed at -3000 odds ($3000 bet wins $100) to be the candidate representing the Republican Party in the general election. When converted to an implied probability, the 45th President has an overwhelming 96.77% chance to win the nomination.

The odds for Bernie Sanders is getting the most love from the oddsmakers and betting public on the Democratic political futures. However, the Vermont Senator still has some hurdles to overcome—unlike his presumed opponent—before he’s a safe bet to win the party’s nomination.

At +375 ($100 bet wins $375), Sanders has approximately a 21.05% chance to win the 2020 presidential election. While this is far lower than Trump, it’s worth noting that Sanders still has to vanquish seven other Democratic candidates. At the same time, his Republican rival is unlikely to face any serious GOP challengers before receiving the party’s rose.

In fact, the Democratic presidential nominee odds show Sanders getting a whole lot more love from voters feeling blue. The Vermont Senator is listed at +150 ($100 bet wins $100), which gives him a roughly 40% chance of winning the nomination.

If the party nominee favorites were officially decided today, the oddsmakers at BetOnline would open Trump as a slight betting favorite over Sanders to receive more Electoral College votes (270 needed) and win the 2020 presidential election.

All wagers are refunded if the two candidates don’t tango, but Trump is favored at -125 odds ($125 bet wins $100), giving him a true probability of 53.39% to win after eliminating the sportsbooks’ juice.

Sanders, on the other hand, is the underdog with +105 odds ($100 bet wins $105), meaning oddsmakers predict the Vermont Senator has a 46.61% chance to defeat Trump and become the 46th President of the United States.

Although Trump is now slightly favored over Sanders, it’s important to note that the opening potential 2020 matchup betting odds between the two candidates initially showed a 50-50 chance for both candidates in mid-January.

Determining, on Valentine’s Day, whether America will favor roses or violets on Election Day 2020 is a tough call—and an even tougher bet to make. Oddsmakers essentially see Trump vs. Sanders as a coin toss, or pick’em, with less than nine months to go until the general election winner is decided.

While betting against Trump should be a wise lesson most political bettors learned from in 2016, it’s hard to ignore how much value is on Sanders’ odds, especially for the presidency (+375), at this point in the race. With Iowa and New Hampshire now in the books, Sanders is crushing the RCP average polling in nearly every primary state remaining.

Regardless of what anyone may tell you, no one 100% knows what will happen on Nov. 3. While the sportsbooks may be looking at the potential matchup through rose-colored glasses, your best bet—in terms of value—is to take the violets and feel blue on Valentine’s Day 2020.

But only if you want to have the most green in your hands after the presidential election.