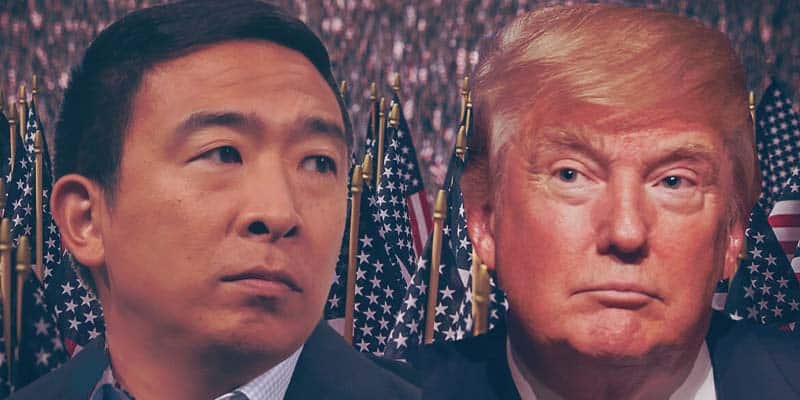 Yang Beats Trump, According To The Oddsmakers

Regardless of what polls and pundits say, it’s going to be difficult for the eventual Democrat nominee to beat President Donald Trump.

Along with having the incumbency advantage, most enormous war chest, 24/7 media attention, Trump’s reelection odds have made it clear that he’s the favorite heading in the 2020 presidential election.

However, the oddsmakers at BetOnline predict only one person would be favored against Trump if the two nominees go head-to-head.

And the best chance the Democrats have of beating Trump is to bet on none other than the former “longer than longshot” candidate.

After converting to a true probability—i.e., removing the vigorish—Yang’s betting odds show he would have a 56.21% chance of winning the presidency when facing Trump, who would only have a 43.79% chance of getting elected to a second term.

While Yang is the only clear favorite, a potential Bernie Sanders matchup against Trump would be hard to predict. In fact, the odds for Sanders would mirror Trump’s chances, and each would open at -120 if they make up the eventual matchup.

Having identical odds means both Sanders and Trump would have precisely a 50/50 chance of winning or losing the general election. Neither would be favored, or an underdog and the race would essentially be a presidential pick ’em—a flip of the coin.

With Yang favored and Sanders receiving a 50/50 shot, then Joe Biden, the Democratic frontrunner according to the polls, should have a significant edge over Trump, right?

Wrong. Winning the nomination and the presidency are two totally different ball games, and Biden’s odds against Trump confirm my doubts: the former Vice President will get exposed once he’s in the national spotlight.

Lastly, there is one more potential nominee matchup against Trump listed by the oddsmakers, and unfortunately, it’s the one that has the least likely chance of going well for the Democrats.

The odds of Elizabeth Warren, who would become the first woman elected president, would open as a sizeable underdog if she’s the Democratic nominee facing the Republican incumbent. At +150, only a 36.63% chance, the oddsmakers give her worst chance of the four Democrats to beat Trump, who would receive -200 odds, a 63.37% chance.

When looking at the current 2020 election betting odds, Trump is the clear favorite over the Democrat’s most likely challengers at BetOnline with -125 odds, which converts to a 55.56% implied probability.

The 2020 Democratic presidential primary is beginning to look like a two-candidate race, according to the polls and betting odds. With the first votes being cast in just over two weeks, both Biden and Sanders have approximately a 16.67% chance of winning the general election.

It’s important to note that their odds are low because whether they win the Democratic nomination is still to be determined, while Trump’s is very likely to be the GOP’s nominee as the incumbent.

But despite having somewhat distance +2000 odds, a 4.76% implied probability, the oddsmakers have made it clear that only one candidate would be favored to beat Trump.

In other words: Yang is the Democrats best bet in 2020.