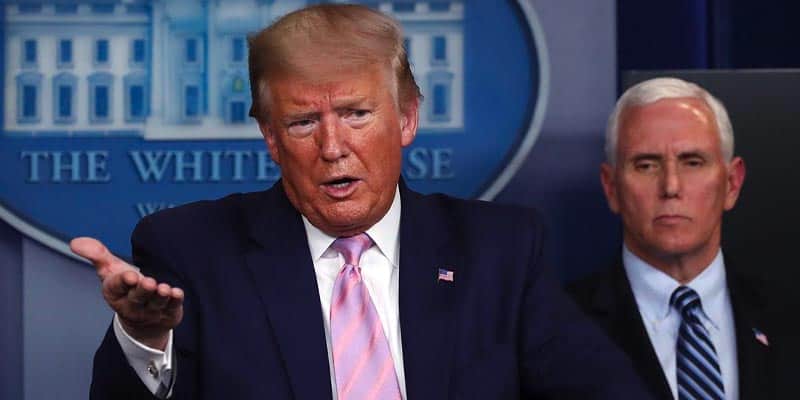 The 2020 Presidential Election odds has experienced a fair amount of volatility over the past month at online sportsbooks and prediction betting markets around the globe.

With April Fools Day clown props in the tiny car’s rearview mirror, Bovada’s updated political futures board for April 2 now provides key projections and insight on what the potential Republican vs. Democrat ticket matchup will look like for the general election.

Because not only are President Donald Trump’s re-election odds favored, but oddsmakers favor Trump-Pence beating Biden-Harris, based on the futures currently receiving action.

Starting with the most likely to occur, the GOP nominee odds are well in Trump’s favor (-2500 and a 95% implied probability) due to his status as the incumbent.

Mike Pence’s odds of being Trump’s Vice Presidential running mate for 2020 are incredibly likely as well. So much so, sportsbooks aren’t even accepting wagers on that line. Barring any unforeseen outliers, the Republican ticket is set in stone.

Next up are the betting odds for the Democratic nomination, which appear clear on paper but are proving to be quite cloudy in reality.

Joe Biden’s nominee odds have been favored since Super Tuesday, and his 2020 election odds even briefly surpassed Trump, becoming the first candidate this cycle to accomplish that feat.

Even though Biden remains the favorite to be the Democratic nominee, his chances have fallen across the board over the past couple of weeks.

The establishment is beginning to wave red flags, and because Bernie Sanders doesn’t exist to them, they’ve started to flirt with Andrew Cuomo as a replacement for the former Vice President — despite the New York governor winning zero pledged delegates during the 2020 Democratic primary.

Bovada oddsmakers still heavily favor Biden to receive the nomination and is currently listed at -450 odds, giving him a roughly 76% chance to win.

Since the party elites are likely stuck with Biden, oddsmakers fully expect him to keep his promise and select a woman as his running mate, according to the Vice President odds.

Leading the female-only field of potential Democrat Vice President picks is Kamala Harris’ chances, which are favored at +210.

There’s a roughly 30% chance the California senator is the eventual VP. While she’s certainly not a “safe bet,” Harris is the definitive frontrunner to be the Democratic nominee’s running mate on the ticket.

Lastly, the 2020 presidential election odds list Trump as the overall favorite at -115 and has a 49% implied probability, giving him the best chance of winning the White House this fall.

With all that said, the political futures from Bovada made it clear that Trump-Pence will likely face Biden-Harris in the general election.

But more importantly: Trump-Pence were heavy underdogs in 2016, but the odds are in their favor for 2020.

No one knows what Election Day will hold, but below you can find the odds on all the remaining candidates’ chances of winning the presidency.