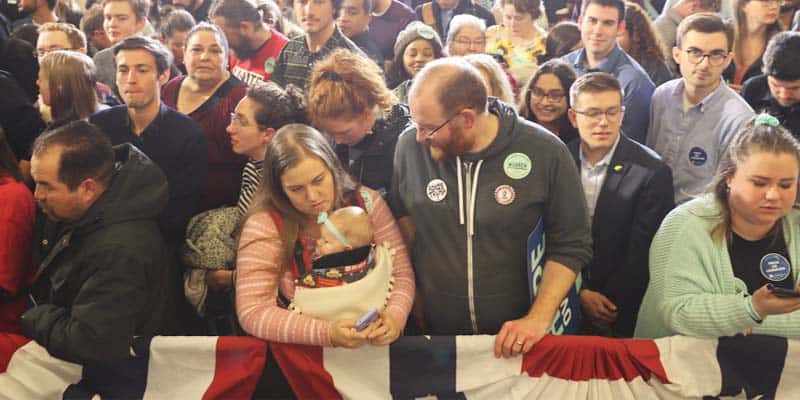 All Bets Are Off After The 2020 Iowa Democratic Caucastrophe

The winner of the 2020 Iowa Democratic Caucuses is… chaos, disaster, catastrophe.

And it looks like hindsight is a close runner-up.

The Iowa Caucus results from the more than 1,600 precincts are still unknown following a delay in reporting from the Iowa Democratic Party.

Who won the Democratic Iowa Caucus?

There is no declared winner for the Iowa Democratic Caucuses at this time. According to the Tuesday morning statement issued by IDP Chair Troy Price, the delay in results is due to officially performing quality control after a “coding error” was discovered in a new app used to count caucus votes securely.

Price’s statement from the press release:

“Last night, more than 1,600 precinct caucuses gathered across the state of Iowa and at satellite caucuses around the world to demonstrate our shared values and goal of taking back the White House. The many volunteers running caucus sites, new voters registering as Democrats, and neighbors talking to each other about the future of our country demonstrated the strength of our party.

“We have every indication that our systems were secure and there was not a cyber security intrusion. In preparation for the caucuses, our systems were tested by independent cybersecurity consultants.

“As precinct caucus results started coming in, the IDP ran them through an accuracy and quality check. It became clear that there were inconsistencies with the reports. The underlying cause of these inconsistencies was not immediately clear, and required investigation, which took time.

“As part of our investigation, we determined with certainty that the underlying data collected via the app was sound. While the app was recording data accurately, it was reporting out only partial data. We have determined that this was due to a coding issue in the reporting system. This issue was identified and fixed. The application’s reporting issue did not impact the ability of precinct chairs to report data accurately.

“Because of the required paper documentation, we have been able to verify that the data recorded in the app and used to calculate State Delegate Equivalents is valid and accurate. Precinct level results are still being reported to the IDP.  While our plan is to release results as soon as possible today, our ultimate goal is to ensure that the integrity and accuracy of the process continues to be upheld.”

When will the Iowa Democratic Caucus results be released?

Caucusgoers gathered together at 8:00 pm ET on Monday, and the first results were expected by 8:30 pm ET for smaller sites and around 11:00 pm ET for larger groups.

But at of the time of writing on Tuesday, there are still no Iowa voting results for the candidates hoping to grab a share of Iowa’s 41 delegates and increase their odds of winning the Democratic presidential nomination.

According to the Associated Press, Democratic Party officials informed each of the campaigns of their release plans on a private conference call early Tuesday morning.

Price told all of the Democratic candidates that the party would release more than 50% of all Iowa caucus results at 5:00 pm ET on Tuesday. When Price was asked by several campaign staffers when the party would release the full results—whether it’ll be days or weeks until all the votes are counted—or how officials could ensure their integrity, the state party chairman declined to comment.

Who is favored to win Iowa?

The betting odds for Vermont Sen. Bernie Sanders indicated he was the unanimous favorite to win the Iowa Democratic caucuses, according to the oddsmakers at online sportsbooks.

Sanders had approximately a 67.97% chance of winning Iowa heading into Monday evening. After voting got underway, Sanders’ chances rose to a 76.53% implied probability once the betting public began wagering money on the Vermont Senator’s odds.

Here’s a look at Sanders’ Iowa odds across all of the Presidential Election Odds political betting sites before the caucuses began until the oddsmakers removed the political futures due to the delay in reported results.

Can I still bet on the Iowa Democratic Caucuses?

Yes, MyBookie still has odds available on which Democrat will win Iowa, but the other three sportsbooks have taken down their Iowa betting odds due to the technical issues stemming from the Iowa Caucus app.

Below you can find MyBookie’s current betting odds for each of the candidates and their chances to win the 2020 Iowa Democratic Caucuses.

The number in parentheses is Democratic presidential candidates’ odds before voting began on Monday. We’ve also removed the vigorish (a.k.a. “juice”) from the sportsbook, so you can examine the true probability for each candidates’ current and exact percentage chance to win Iowa.