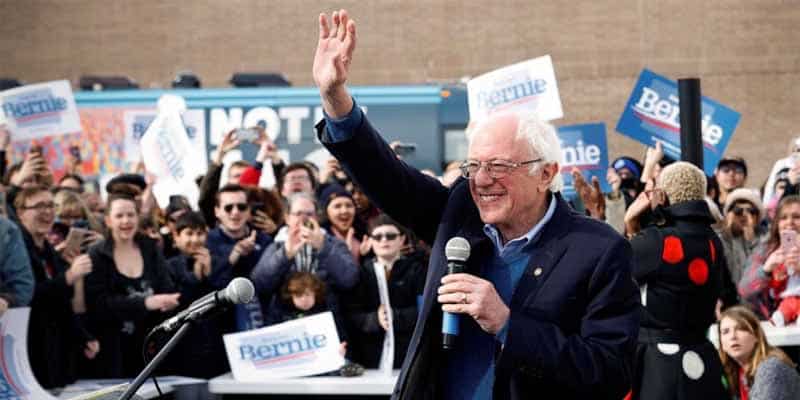 Bernie Sanders Has An 68% Chance To Win Iowa Democratic Caucus

The road to the 2020 presidential election begins today with the Iowa Caucuses. Although the Republican side is decided due to President Donald Trump’s incumbency, the Democrats’ caucus is still up for grabs.

Remember: All candidates (from both parties) that won both Iowa and New Hampshire have gone on to win the party nomination.

Since Democrats adopted the current primary format in 1968 and Republicans in 1972, only one candidate (Bill Clinton, 1992) has not won either of the first two states but gone on to become the nominee.

A total of 41 delegates are up for grabs, and the winner of the Iowa Caucus is sure to see a considerable boost in his or her Democratic presidential nominee odds.

And according to the 2020 Iowa Democratic Caucus betting odds, it appears the sportsbooks are unanimously favoring the Bern.

Vermont Sen. Bernie Sanders’ odds are listed as the favorite to win the Iowa Caucuses held on Monday, Feb. 3, 2020. When Sanders’ chances from all the political betting sites are combined into one implied probability, we can see that the oddsmakers believe he has about a 68% chance to win the first state of the Democratic primary.

Who Should I Bet On To Win The Iowa Democratic Caucus?

At this point, it looks like Sanders’ strong polling, fundraising, and ground game in Iowa is going to be hard to beat.

According to the Iowa Democratic Presidential Caucus polling average at RealClearPolitics, Sanders leads with 23% support, followed by former Vice President Joe Biden at 19.3%. The most recent poll from Emerson, conducted from Jan. 31-Feb. 2, shows Sanders at 28% and Biden at 21%, giving the Vermont Senator a 7%-point lead as of yesterday.

If you are betting on Sanders to win the Iowa Caucus, then the betting odds at MyBookie hold the most value for the Vermont Senator coming out on top. Their oddsmakers list Sanders at +120 odds, which means a $100 bet would win $120 should he finish with the highest percentage of caucus support. For comparison, a bet on Sanders at Bookmaker.eu holds the least value with -370 odds, meaning you’ll need to wager $370 to win $100.

When will the Iowa Democratic Caucus results be announced?

The Iowa Caucuses begin tonight at 8:00 pm ET. There are more than 1,600 caucus sites spread throughout the state, and results come in based on how large the gatherings are, with smaller groups taking only a few minutes to larger groups taking up to two or three hours, depending on the size.

What are the other Democrats’ chances of winning Iowa?

Biden comes in second at all of the online sportsbooks. The most value for his Iowa odds are +350, 22.22% implied probability, at Bookmaker.eu, which means a $100 wager would win $350 if the Obama’s VP pulls the upset.

The third and fourth spots are a bit shakier but are shared by Massachusetts Sen. Elizabeth Warren and former South Bend Mayor Pete Buttigieg.

Below you can find the complete list of candidates with odds to win the 2020 Iowa Democratic Presidential Caucus tonight.