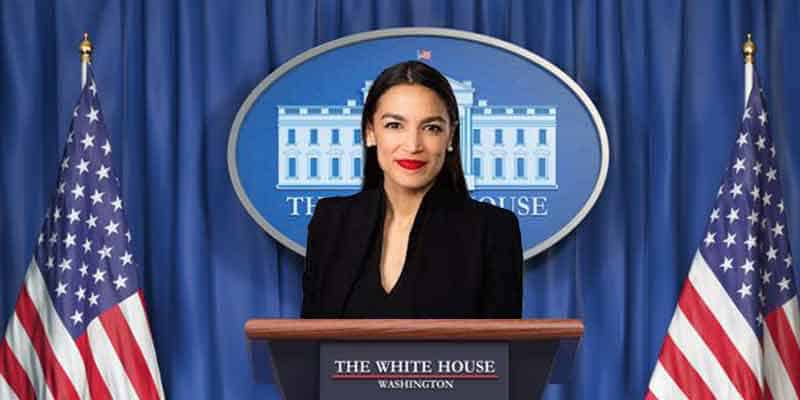 Alexandria Ocasio-Cortez is in the middle of her second term as a US Representative from the 14th Congressional District of New York state, and by most accounts, will be involved in the leadership of the next generation of the Democratic Party.

AOC is placed directly in the crosshairs of GOP critics that often try to put her in her place, but she continues to strive despite staunch opposition, oftentimes from within her own side of the political aisle.

There is no denying the overwhelming popularity of US Representative Ocasio-Cortex, but some political sportsbook sites are now featuring her just behind Joe Biden in the 2024 Presidential betting odds.

Many pundits assumed that the selection of Kamala Harris as the Vice President by Joe Biden’s campaign was a signal to voters that strong leadership would be in-line to assume power should anything occur with the President’s health prior to January of 2025.

Now, with AOC’s Presidential odds placing her among the top options, there is the potential that the eventual DNC nominee in 2024 may not be either of the two top politicians currently occupying the White House.

We must confess, we keyed in on the above POTUS odds offered up by MyBookie because of Ocasio-Cortez’s placement, as she is not included as prominently at other political sportsbooks.

AOC’s money line at Bovada and at BetOnline is set at +2500, placing her seventh overall among the odds for potential 2024 Presidential Candidates.

There is the possibility that members of MyBookie Sportsbook are simply laying more action on AOC’s odds than at other books, but typically, when unusual betting activity occurs, the lines are taken down to give them some time to adjust.

Sometimes, if the action is laid so unevenly that the sportsbook site is no longer offering the line, it can be removed permanently.

That scenario does not seem to be the case here. The oddsmakers at MyBookie are merely granting AOC greater odds to win as they are projecting her status to continue to surge over the next two years.

What these political betting odds suggest is that if something does indeed happen to President Biden’s health or well-being during his first term that causes him to drop out of the 2024 race, DNC voters may be ready to turn the page on Harris and adopt a more progressive socialistic philosophy.

That said, bettors that are looking to place a wager on the odds for AOC to become the next President of the United States should choose a sportsbook that does not favor her as highly to win.

A $1 bet on Congresswoman AOC to become the next President at MyBookie will cash out at $3, while the same bet will earn $25 at the other two books listed.

Regardless of how you intend to place your bets for the 2024 Presidential Election, as readers can see, it does pay to have look around at what each book is offering on the same line.