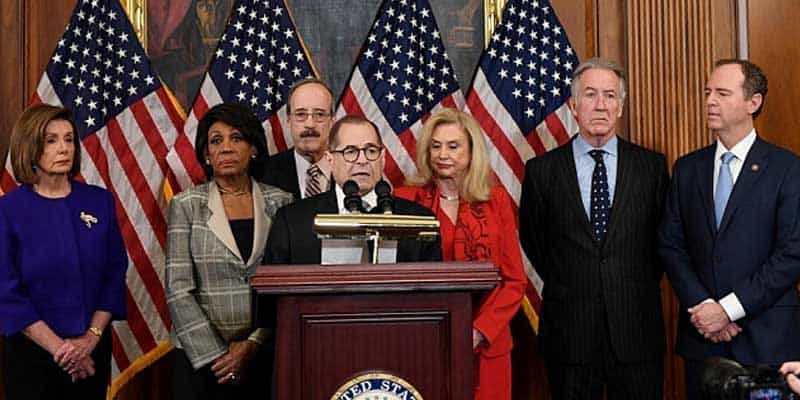 Articles Of Impeachment Released, Trump Not Favored To Be Removed From Office

The articles of impeachment against President Donald Trump have officially been announced today. Following the inquiry that featured multiple interviews from a variety of key players, Democratic lawmakers are bringing two articles against the POTUS.

House Judiciary Committee Chairman Jerry Nadler announced the two articles this morning– abuse of power and obstruction of Congress– two of the possible charges that we mentioned yesterday.

“Today, in service to our duty to the Constitution and to our country, the House Committee on the Judiciary is introducing two articles of impeachment, charging the President of the United States Donald J. Trump with committing high crimes and misdemeanors,” Nadler said at the announcement this morning.

Before anything happens to Trump, the Judiciary Committee will have to vote on each article separately. This vote is likely to take place later this week, even as soon as Thursday, before being sent to the full House.

If either one of the articles passes the vote, they will be sent to the Senate for a trial to be held. Two-thirds of the Senate, 67 senators, must vote to convict Trump before he can be removed from office.

Getting to that point could prove difficult. Despite two previous Presidents getting impeached, Bill Clinton in 1998 and Andrew Johnson in 1868, neither was removed by Congress.

The historical precedence could be one reason why Trump’s removal odds are so low. According to oddsmakers at BetOnline, there’s a -800 chance that the incumbent makes it all the way to the 2020 election.

Will Trump be impeached and removed from office?

Of course, Trump denies any wrongdoing. Claiming that he “has done NOTHING wrong,” the POTUS posted a string of tweets to voice his frustrations with the articles of impeachment against him.

To Impeach a President who has proven through results, including producing perhaps the strongest economy in our country’s history, to have one of the most successful presidencies ever, and most importantly, who has done NOTHING wrong, is sheer Political Madness! #2020Election

Nadler just said that I “pressured Ukraine to interfere in our 2020 Election.” Ridiculous, and he knows that is not true. Both the President & Foreign Minister of Ukraine said, many times, that there “WAS NO PRESSURE.” Nadler and the Dems know this, but refuse to acknowledge!

Shifty Schiff, a totally corrupt politician, made up a horrible and fraudulent statement, read it to Congress, and said those words came from me. He got caught, was very embarrassed, yet nothing happened to him for committing this fraud. He’ll eventually have to answer for this!

The charges against Trump stem from a whistleblower’s report surrounding a July phone call the POTUS had with Ukrainian President Volodymyr Zelensky.

During the conversation, it is alleged that Trump proposed a quid pro quo: Ukraine would receive military assistance in exchange for an investigation into the Bidens.

If Trump is removed from office following the Senate trial, Vice President Mike Pence would become the new commander in chief. Until that point, Trump leads the 2020 Presidential election odds with +125 chances of receiving another four years.