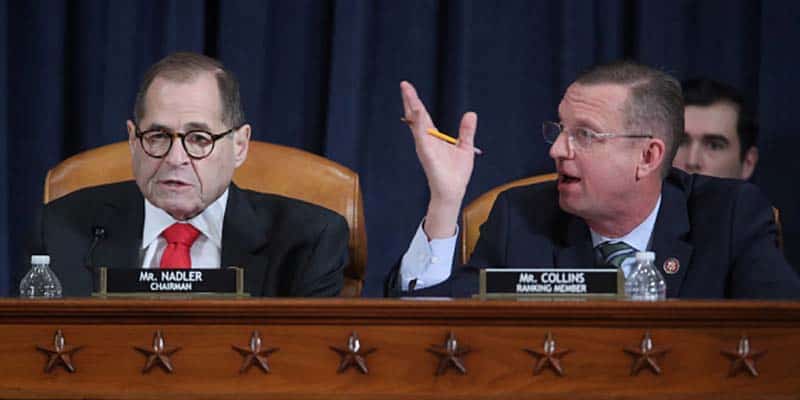 House Judiciary Committee Chairman Jerry Nadler said Sunday that lawmakers could vote on the articles of impeachment against President Donald Trump as early as this week.

The panel is waiting until their hearing today before drafting specific articles.

“There are possible drafts that various people are writing,” Nadler told State of the Union on CNN. “But the fact is we’re not going to make any decision as to how broad the articles should be– as to what they contain, what the wording is– until after the hearing [Monday].”

Despite Nadler’s prediction that, if the articles are presented to a jury, there would be “a guilty verdict in about three minutes flat,” certain oddsmakers don’t see it the same way.

Based on the political betting odds at MyBookie, impeachment and removal of the President is unlikely before the 2020 election. With his -265 odds of “No,” Trump has a 68.84% chance of staying in the White House– until the election, at the very least. However, his -185 odds (31.16% chances) of being removed from his post are still a significant number.

Will Donald Trump be impeached and removed from office?

The impeachment inquiry surrounds the controversial July phone call Trump had with Ukrainian President Volodymyr Zelensky. Supporters of impeachment allege that Trump propositioned a quid pro quo: military aid for Ukraine in exchange for an investigation into the Biden family.

According to the POTUS, all allegations are false. Trump’s Twitter features multiple references to a “Witch Hunt” and that everyone should “Read the Transcripts!”

Although the articles of impeachment have yet to be drafted, there are a few offenses that could show up: 1.) abuse of power and bribery for using his political position to issue a quid pro quo to undercut a political rival, 2.) obstruction of Congress for his administration directing witnesses not to testify after being subpoenaed, and 3.) obstruction of justice for possible offenses inside the Mueller Report.