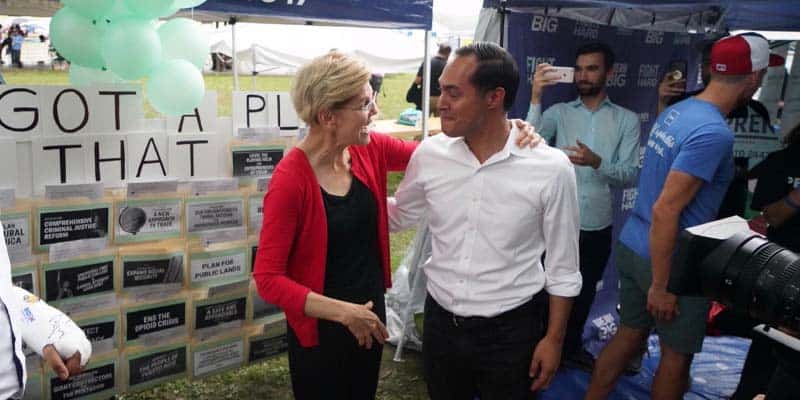 Well, that was fast.

Julián Castro, the former Obama Housing and Urban Development Secretary, officially endorsed Massachusetts Sen. Elizabeth Warren for president on Monday and posted his support for her White House bid in a video on Twitter.

Elizabeth and I share a vision of America where everyone counts. An America where people⁠—not the wealthy or well-connected⁠—are put first. I'm proud to join her in the fight for big, structural change. pic.twitter.com/xDvMEKqpF3

“My story wouldn’t be possible without the strong women who came before me,” Castro said in the tweeted video. “My grandmother, Victoria, came to the United States as seven years old. She taught her family the value of hard work as she cleaned houses and worked as a maid.”

Castro goes onto to say that those values were passed down to his mother, a single mom of two, and in just two generations after his grandmother first arrived in this country, he was blessed to serve in Obama’s cabinet and run for president.

“There’s one candidate I see who’s unafraid to fight like hell to make sure that America’s promise will be there for everyone,” Castro said in the video. “That’s why I’m proud to endorse Elizabeth Warren for president.”

The timing and the current outlook of Democratic race hint at Warren possibly selecting Castro as her pick for Vice President in the near future, which would be the first VP choice of the primary season.

No official announcement for Warren’s VP has made by either candidate, but Castro will attend her rallies, starting with a special event in Kings Theatre in Brooklyn on Tuesday.

And while a Warren-Castro ticket just might do the trick for the general election, the endorsement and possible Latino VP nod may be too little too late for the primary, with Warren’s betting odds, poll numbers, and fundraising efforts in sharp decline since the start of winter.

The most recent betting odds to win the 2020 Democratic nomination list Warren in third place at +600 odds, which is a 14.29% implied probability.

However, the public betting market began to turn a cold shoulder to her nominee chances as she began to fall in early November. Warren was the heavy favorite just two months, receiving -120 odds, a 54.55% chance to face Donald Trump in one year’s time.

She is definitely still within striking distance, but Castro’s endorsement—and the possibility of him becoming her VP—won’t move the needle much in Iowa or New Hampshire.

Castro frequently polled at 2% or less in the first two early primary states, according to the RealClearPolitics average in those states.

Even if all of his likely voters go to her, then Warren—places third or fourth in early states with less than a month before the first votes are cast—then she’d still be 5-to-6% behind Vermont Sen. Bernie Sanders, who leads both states and has strong support among Latino voters from all around the country.

While Castro’s endorsement will likely get some positive media exposure and give her a significant boost in the general election if she were to become the party’s nominee, the odds of the announcement increasing Warren’s chances of winning the Democratic nomination seem pretty low at this time.

Democratic Nominee for the 2020 Election