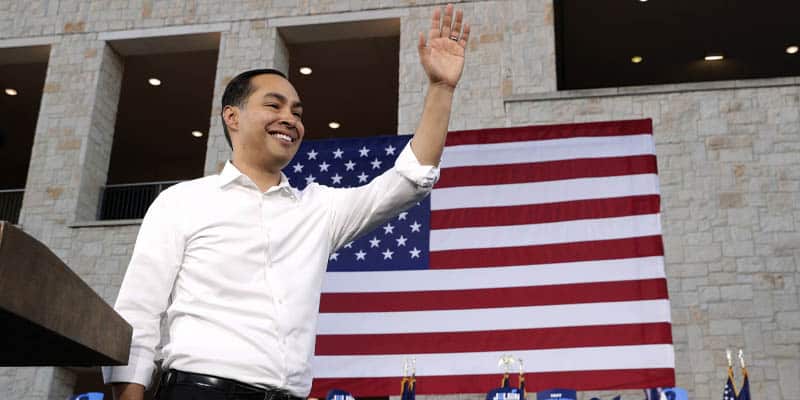 Julián Castro Ends 2020 Bid As Odds Continued To Get Longer

Only two days into 2020, and another Democratic presidential candidate has already bit the dust.

Castro announced he was ending his White House bid on Twitter: “It’s with profound gratitude to all of our supporters that I suspend my campaign for president today.”

I’m so proud of everything we’ve accomplished together,” he added. “I’m going to keep fighting for an America where everyone counts—I hope you’ll join me in that fight.”

It’s with profound gratitude to all of our supporters that I suspend my campaign for president today.

I’m so proud of everything we’ve accomplished together. I’m going to keep fighting for an America where everyone counts—I hope you’ll join me in that fight. pic.twitter.com/jXQLJa3AdC

In a crowded field of Democratic contenders and favorites, Castro—the only Latino running for president—struggled to gain support in the polls and keep up with the fundraising efforts of other candidates vying to unseat Donald Trump in November.

As a result, the 2020 presidential election odds board and the betting market never gave Castro a significant chance to win it all, especially once he started missing primary debates. Here’s a look at his probability of winning from the start of 2019 until the end of his campaign on Thursday.

Julián Castro’s 2020 Odds Then And Now

After a slight dip in the following month, March turned out to be Castro’s best month in terms of chances to win.

The public betting market vaulted him into the top 10 Democratic candidates, receiving +2800 from oddsmakers and giving him a roughly 3.45% chance to win the 2020 presidential election.

However, with the announcement from Joe Biden coming in the following month and other “long shot” candidates, such as Pete Buttigieg and Andrew Yang, seeing their odds, polls, donations rise, Castro began to get squeezed out of contention with a message that did not resonate among likely Democratic voters.

From April 2019 until November 2019, Castro’s presidential election odds remained virtually unchanged throughout the first four debates and consistently hovered between +10000, a 0.99% chance, and +12500, a 0.79% chance over that time period.

And after Castro missed the Democratic debate polling requirement to qualify for the stage in November, it all but sealed his fate. His odds plummeted to +20000, a 0.50% chance, in the following month.

When Castro announced the end of his 2020 campaign on Thursday, his betting odds to win the general election were at an all-time low of +25000, which gave him about a 0.40% chance of winning in the Fall.

Below you can find a list of the latest odds to win the 2020 general election. And well, as for Castro: ¡Mejor suerte la próxima vez, amigo!