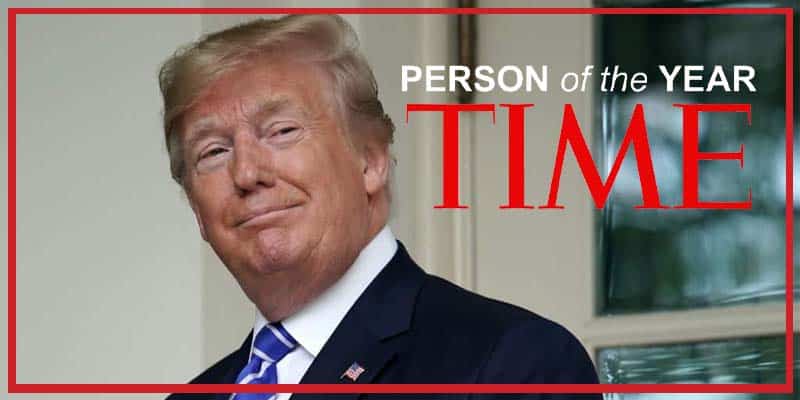 Donald Trump Favored As Time’s Person Of The Year 2019, Would Be Second Since 2016

The tradition of choosing a Time Person of the Year started in 1927 when the magazine editors wanted to redress the fact that Charles Lindbergh was not featured on any of their covers despite his monumental trans-Atlantic flight.

Lindbergh was then named Man of the Year to highlight his achievement while also starting a new tradition for the publication.

Over the years, history’s most influential names have graced the cover: Winston Churchill, Albert Einstein, and the computer, to name a few.

Time has occasionally given the POTY to not-so-great names, too, as the magazine claims that a person is selected for their influence over the last year, “for better or for worse.”

One of the most popular picks for POTY is United States Presidents. Other than Calvin Coolidge, Herbert Hoover, and Gerald Ford, every POTUS since the award’s founding has been named Person of the Year.

Trump was Time’s Person of the Year in 2016, the same year he was elected President. According to BetOnline, he could do it again in 2019.

The 45th President currently has the best odds to win the POTY at +350 chances, barely edging out UK Prime Minister Boris Johnson at +400 odds.

Odds to win Time Person of the Year 2019

Trump’s favorable betting odds for the designation are well-deserved. The incumbent’s year has been full of Twitter tirades, fast food celebrations for athletes, and of course, the impeachment proceedings.

Following a series of subpoenas, closed-door depositions, public testimonies, tweets, and interviews, Trump’s impeachment odds topped out at -275 at the end of November.

The current POTUS certainly foots the bill for Time’s “influential” parameters. Regardless of good or bad press, Trump is always present in the news and that could earn him the spot for the second time.