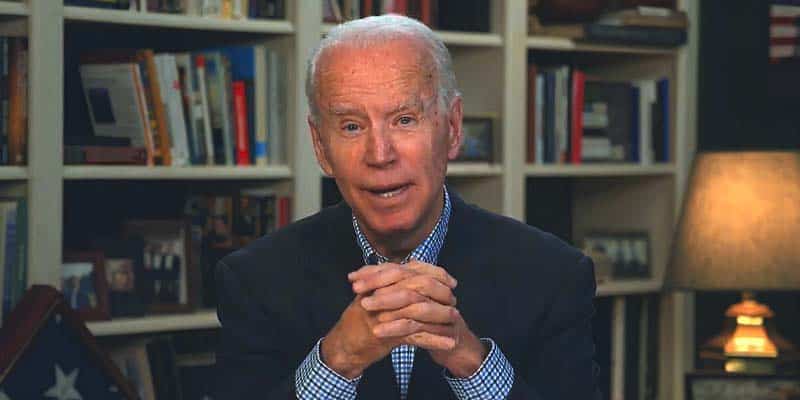 Political bettors for the 2020 presidential election market have been “ridin’ with Biden” ever since the former Vice President picked up several key victories from the Super Tuesday Democratic primaries.

Across the board, Joe Biden’s odds of winning the nomination and White House had continued to climb in the weeks following Tuesday, March 3.

But recently, Biden’s bandwagon has begun to look as if it may run out of gas before his campaign can cross the finish line—causing his 2020 election chances to slip with some bettors abandoning ship.

Since Super Tuesday, the 2020 Democratic nominee futures at Bovada Sportsbook have listed Biden as the clear favorite to earn the 1,991 delegates needed to secure the party’s nomination. While he continues to hold a pretty significant edge, there’s no doubt Biden’s chances are on the decline.

Biden Favored But For How Long?

Joe Biden is currently listed at -800 odds, which gives him about an 85% chance of becoming the 2020 Democratic presidential nominee. Today, an $800 wager on Biden would pay out the initial bet plus $100 if he reaches the delegate threshold.

There’s no doubt Biden is in the driver’s seat and that it’s his race to lose, especially since the current delegate count shows him with a comfortable lead and up by more than 300 delegates over Bernie Sanders.

However, Biden nominee chances were listed at -2000 odds, giving him a 90% implied probability before the spread of COVID-19 began to ramp up in the United States.

The drop may not seem like much since he’s still unquestionable the Democratic favorite. But considering there hasn’t been a state primary since March 17 and won’t be another until May at the earliest, the “pause button” on the race should be working to his advantage—not against him.

On March 20, Joe Biden became the first candidate this cycle to overtake President Donald Trump and be installed as the new favorite to win the 2020 general election on Tuesday, November 3.

Biden received -105 odds at the time, which gave the former VP a roughly 50% chance to win the presidency. Meanwhile, Trump took the second spot at +100, giving him a 49% implied probability.

Look, it’s no secret that Biden’s best gaffes make up a rather long list. And to be fair to the former VP, a majority of Democratic electorate does not seem to care that he frequently bungles words while speaking or calls potential voters derogatory names.

Since the March 17 primaries, Biden has made very few public appearances on the Internet during the coronavirus pandemic, unlike Sanders, who hosts live streams almost every day.

After Biden’s first campaign stream was a disaster, the former VP has limited speaking alone on camera in favor of controlled one-on-one discussions with cable news anchors.

And needless to say, it’s been nothing short of a catastrophe for Biden over the past couple of days.

Gaffes are all fun and games, but accusations of sexual assault, on the other hand, are something that Biden’s campaign cannot hide him from or have the VP take lightly.

Tara Reade, Biden’s former assistant in 1993 while he was senator, has spoken multiple times about his inappropriate office behavior and his treatment of her while working in Washington DC.

According to a new report from The Intercept on March 24, Reade made the decision in January to reach out to Time’s Up, an organization founded during the start of the #MeToo movement in 2017 that aims to help survivors of sexual assault tell their stories and fund their legal defense.

Initially, Time’s Up said it was willing to help Reade, but in February, the organization’s director and others told her “no assistance could be provided because the person she was accusing, Biden, was a candidate for federal office, and assisting a case against him could jeopardize the organization’s nonprofit status.”

On March 25, podcaster Katie Halper posted her interview with Reade, where she gave a graphic and horrifying detailed account of what Biden allegedly did to her while working in his office.

Reade told family members, friends, and colleagues at the time in 1993. After the interview, The Intercept received permission to contact the people she told, and those individuals have since corroborated her story.

As for what happens next to Joe Biden remains to be seen, but you can listen to the interview with Reade in Halper’s tweet below.

This is a story that @ReadeAlexandra has been trying to tell since it happened in 1993. It's a story about sexual assault, retaliation and silencing. #meToo https://t.co/yHz3iFi9a5