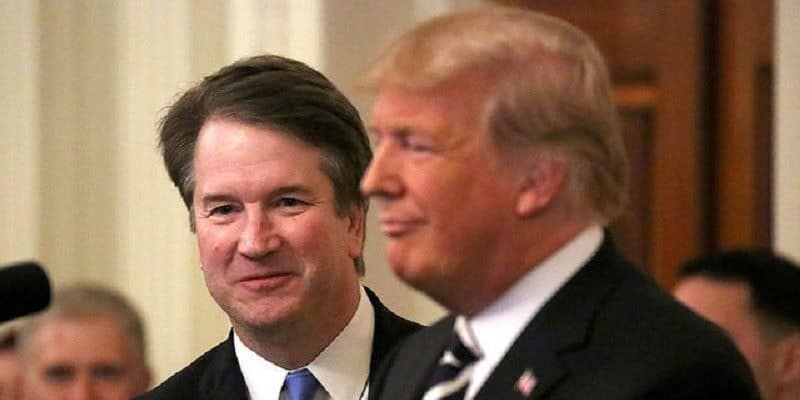 Supreme Court Justice Brett Kavanaugh, who went through the mother of all wringers in his confirmation last year, is making headlines again.

Of course, despite what the big red “Breaking News” tags on every media outlet across the country want you to believe, the newest Kavanaugh accusations aren’t actually new. It turns out that they were known to investigators – and the media – throughout the justice’s original vetting process.

In fact, the alleged victim in the case has repeatedly claimed to have no recollection of the event in question. And despite being continuously harassed by investigators and reporters for a solid year, she’s made it clear that she has no interest in speaking with them.

Helpfully, partisan political operatives have been more than happy to fill in the gaps of what supposedly happened at some teenage party a lifetime ago.

But as ever, history repeats, and this week’s moral outrage – real or fake – is palpable on both sides of the aisle.

As such, sportsbooks are getting in on the action. Of course, these books don’t really care what Kavanaugh did or didn’t do. They only care about giving an eager public the opportunity to bet on the outcome of the latest full-court impeachment press. (Incidentally, “impeachment” seems well-positioned to be the American Dialect Society’s 2019 Word of the Year.)

BetOnline has odds on whether or not Kavanaugh will be impeached by the end of the year, as well as whether or not he’ll just resign to get away from the unending libelous mudslinging of modern political theater.

Will Brett Kavanaugh be impeached by the end of 2019?

Will Brett Kavanaugh resign by the end of 2019?

While the Kavanaugh scandal isn’t new – and though no new information has been unearthed in this conveniently-timed redux – the larger hope was that the public had simply forgotten the events of last year and would thus embrace the new media hysterics.

After all, it’s been just shy of a year since Kavanaugh took his place as an Associate Supreme Court Justice, and the madding crowd has a short memory.

So now, Kavanaugh is facing recycled accusations about various unprovable things that may or may not have happened at some undefined point a long time ago.

The bombshell (or dud, depending upon your perspective) reported by the New York Times was quickly proved to be an unethical smear job, leading to retracted tweets and “updated” articles (i.e. articles with salient, narrative-breaking details edited back in).

Kavanaugh, ironically, has been reliably centrist or center-left with his votes during his young career on the Supreme Court bench. Nevertheless, he remains one of the chief bogeymen among the left-leaning media and the Democratic side of Congress.

As in 2018, President Donald Trump quickly came to Kavanaugh’s defense this time around, issuing a series of tweets on the subject. Trump, obviously, is unafraid to defend his allies. Their scandals are unlikely to stick to the Teflon Don.

Brett Kavanaugh should start suing people for libel, or the Justice Department should come to his rescue. The lies being told about him are unbelievable. False Accusations without recrimination. When does it stop? They are trying to influence his opinions. Can’t let that happen!

Can’t let Brett Kavanaugh give Radical Left Democrat (Liberal Plus) Opinions based on threats of Impeaching him over made up stories (sound familiar?), false allegations, and lies. This is the game they play. Fake and Corrupt News is working overtime! #ProtectKavanaugh

“The New York Times walks back report on Kavanaugh assault claim.” @foxandfriends The one who is actually being assaulted is Justice Kavanaugh – Assaulted by lies and Fake News! This is all about the LameStream Media working with their partner, the Dems.

“What’s happening to Justice Kavanaugh is a disgrace. This guy is not a good man, he is a great man. He has to go to his church with his family while these terrible reports are being written about him, a disgrace!” Dan Bongino @foxandfriends

Just Out: “Kavanaugh accuser doesn’t recall incident.” @foxandfriends DO YOU BELIEVE WHAT THESE HORRIBLE PEOPLE WILL DO OR SAY. They are looking to destroy, and influence his opinions – but played the game badly. They should be sued!

Meanwhile, as Trump offers outspoken support of his SCOTUS nominee, he’s also playing to his base in a political fight of his own. As with Kavanaugh, impeachment is the issue of the day.

However, after former Trump campaign manager Corey Lewandowski was aimlessly and embarrassingly grilled on Capitol Hill this week, Trump’s impeachment odds have grown considerably longer than they were before.

As expected, the week’s events have had no appreciable negative effect on Trump’s presidential election odds, with the incumbent still sitting high atop the betting boards.