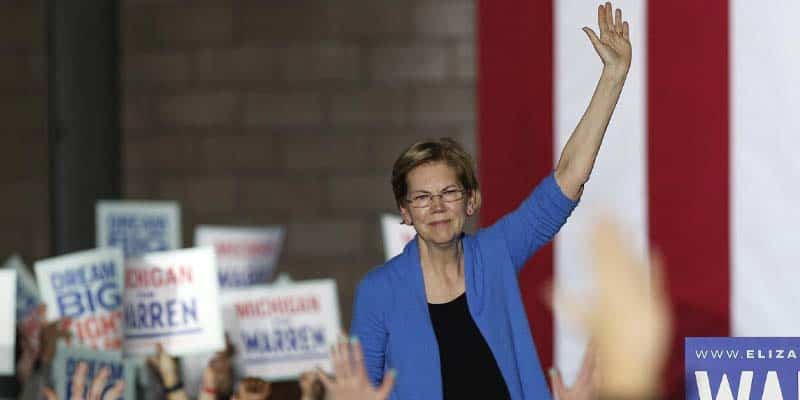 Elizabeth Warren, U.S. Senator from Massachusetts, ended her 2020 presidential campaign today, and there is currently no update on what her plans are going forward.

Our work continues, the fight goes on, and big dreams never die. From the bottom of my heart, thank you. https://t.co/28kyKe777L

Warren was the last announced female candidate with odds to win the 2020 election. Unfortunately, her dropping out means a woman more than likely will not be elected President during the general election this year — the 100-year anniversary of the 19th Amendment, which granted some American women the right to vote in 1920 (minority women were granted the right to vote with the Voting Rights Act of 1965).

After the dust has settled from Super Tuesday, the 2020 Democratic presidential nominee odds now come down two geriatric white men with Joe Biden and Bernie Sanders as the only candidates left standing.

There are Democratic nomination odds for other potential presidential candidates, but they should be considered “longer than longshot” at this point in the race.

Warren has the fourth-best chance at Biden’s VP with an approximately 15% probability. However, it’s worth noting she’s not listed among Bernie’s VP odds that were released on Super Thursday.

Since Warren isn’t in the running for President and getting Biden’s nod at VP isn’t a given, the Bovada oddsmakers do open Warren as the favorite to be the next presidential candidate to appear on the Joe Rogan Podcast.

And while this political proposition wager is unlikely to happen, it’s worth noting that Bernie Sanders, Andrew Yang, and Tulsi Gabbard have all sat down to talk with Joe Rogan during the 2020 race.

Next Presidential Candidate To Appear On Joe Rogan Podcast

*Listed selections only. Must take place before November 3, 2020 for action. Any wagers placed on the same day news becomes public knowledge will be deemed void.

With the Super Tuesday betting futures graded, it’s time for oddsmakers and bettors to look ahead to see what’s next on the 2020 Democratic presidential primary schedule.

The opening betting lines for some of the primaries after the March 10 elections have also been posted. Biden is favored in every state after next week’s contests, but we’ll hold off on a deep-dive until oddsmakers release the betting chances for all the upcoming state primaries.