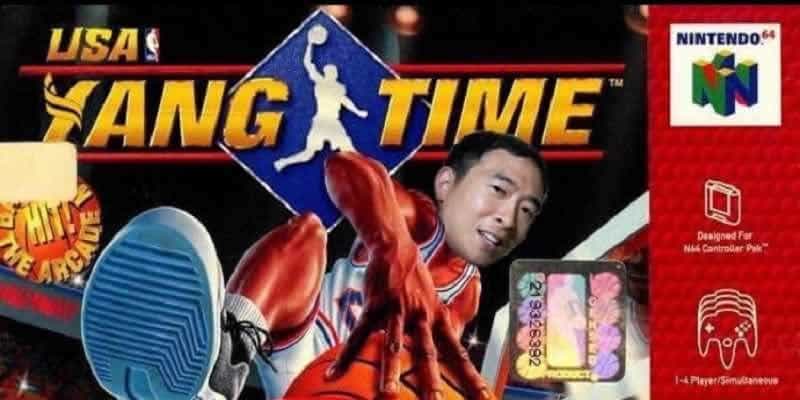 Apparently, he’s also something of a baller.

And that, as we all know, is the sole prerequisite for being a shot-caller.

But while Yang will argue his merits regarding the latter at tonight’s DNC debate in Houston, Texas, he’ll have to wait a bit to prove his on-court mettle.

After all, Cruz’ basketball prowess is well-established, as the politician last year beat Jimmy Kimmel 11-9 in a charity game for the ages.

This time around, sportsbooks are taking notice. Bovada has posted odds on the potential contest, giving the more experienced Team Ted Cruz a noticeable edge at -145 compared to Team Andrew Yang’s +115.

But how did the unlikely Yang-Cruz matchup come to be?

It all started yesterday when ABC News ran a puff piece on Yang playing a little b-ball in H-Town. The footage of his on-court…presence…quickly went viral. Air Jordan, make way for Entrepreneur Jordan!

Initially, the Texas senator dismissed the proposal, saying he’d only play against those polling at 5 percent or better. Fortunately for those of us who like a little sport with our political theater, Yang was quick to point out that he was, in fact, trending at 5 percent in a recent Hill-Harris X poll.

Ted I would be delighted to beat you in basketball. 😀🏀 pic.twitter.com/RHFrdAfcZ9

With his bluff called, Cruz had no choice but to accept the challenge.

Bring it. 4 on 4, you plus three of your paid staffers vs me and three of my paid staffers (no outside ringers). Say, this Friday afternoon in Houston? The loser gives $5k to the (non-political) charity of the winner’s choice? Game? https://t.co/HVlssiJEA5

Now that you’re all caught up, it’s important to note that Cruz’ proposed rules, as tweeted above, are not set in stone. For example, Cruz wants teams of four, while Yang would rather take Cruz to school mano y mano.

If Yang acquiesces to Cruz’ ground rules, this 4-on-4 nightmare will be held on Friday the 13th in Houston, with the loser paying $5000 – or 5 Yangs – to the non-political charity of the winner’s choosing.

Currently, there’s no word on how many points they’d be playing to. It is also unknown if the Yang-Cruz tilt would stick to the kids’ court or be contested with regulation 10-foot goals.

When I see an eight-foot rim I know exactly what to do. 😀 pic.twitter.com/IFVB4EIiRH

If Yang can out-hustle Cruz and come away with the W, he might just continue his meteoric rise in the crowded field of DNC candidates. Currently, Yang is sitting at fifth on the Democratic primary odds boards.

Regardless of who wins or loses the charity basketball game, Yang has made two things abundantly clear.

One, Twitter isn’t just President Donald Trump’s domain, as seen by the almost daily trends coming from the #YangGang.

Two, while many still view Yang as a longshot for the DNC nomination, his meteoric rise in popularity over the past few months proves he’s unquestionably a strong contender at this point in the 2020 race.