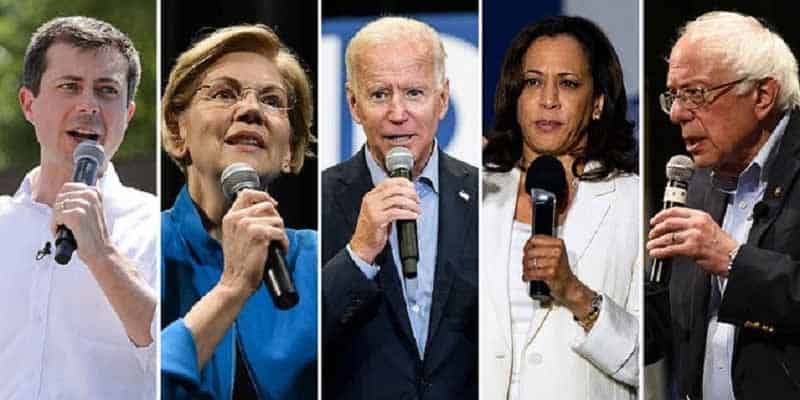 On Thursday, September 12, the third round of the DNC debates gets underway in Houston, Texas. The event is scheduled to run from 8:00 pm to 11:00 pm EST, and ABC is handling the network broadcast.

Though the debate is going up against Thursday Night Football, it promises far more fireworks than any B-side Buccaneers-Panthers contest could ever hope to match. And it’s probably got more stars on the field, too.

However, there are a pair of notable absences, as two rising Democrat personalities – Tulsi Gabbard and Marianne Williamson – didn’t qualify for tomorrow’s debate. They’re still on most sites’ presidential odds boards, though.

That said, 10 DNC hopefuls did manage to meet the debate’s qualifications and will be appearing on stage. The candidates are listed below, along with their current odds to win the DNC nod (via MyBookie).

MyBookie is also offering several debate prop bets on the DNC showdown, most of which are predicated on what the potential candidates will or won’t say in their various sales pitches to the nation. Old standards and current events look to have equal billing.

How many times will “background checks” be said?

Always a hot-button issue, gun control promises to be front and center. After a politically expedient shooting in El Paso (and a not-so-important-one-after-all in Ohio), “background checks” are almost sure to be brought up. MyBookie has placed the over/under on the term at 5.5 instances.

How many times will “climate change” be said?

“Climate change” is the most reliable buzzword for the current crop of Democrat hopefuls, though bettors seem to think that the term won’t be mentioned directly more than 13 times, taking the under at -140. That’s a tough call, though, as all the top candidates have made AGW a primary campaign platform.

How many times will “Hurricane Dorian” be said?

Tying into the above prop, the over/under on how many times any of the debate participants (excluding moderators) mention Hurricane Dorian by name is set at 2.5, with bettors strongly favoring the over. Of all the wagers on the DNC election odds boards, this seems like the biggest lock. Hurricanes are proof of man-made climate change, after all.

How many times will “Russia” be said?

You didn’t expect a national meeting of America’s most level-headed, even-keeled geniuses to forego any mention of the bogeyman du jour, did you? Of course, the narrative has become more generalized lately, with “meddling” and “collusion” being dropped from MyBookie’s generic “Russia” prop.

How many times will “Obama” be said?

It may be Texas, but former president Barack Obama is still popular in these here parts, so you can expect the Democrats to heap praise on the guy whenever it’s convenient. Most bettors expect to hit on the over at 5.5 Obamas. That’s like Pinocchios, but worse.

How many times will Joe Biden mention “Obama”?

Nobody really knows what the heck Creepy Uncle Joe is going to say. Most of the time, it seems like he’s not sure, either. Presumably, he’ll be eager to namedrop his former boss, if he can actually remember who that actually is.

How many times will Donald Trump tweet during the debate?

The Donald will be watching the Democratic debate, of that you can be sure. The question is, how many times will he actually tweet about it? The smart money is on the under (5.5 tweets, -160), as Trump only tweeted once during the last go-round. In fact, Trump has a golden opportunity to crank his Twitter efficiency to 11 and just retweet himself.

Will “impeach” be said by any candidate?

Every Democratic candidate wants to impeach Trump, except Tulsi Gabbard. And since Gabbard – the most Googled candidate of this election cycle – didn’t make the cut, it’s almost a sure thing that one of these debaters will dangle the old carrot anew.

Will “Trump” be said in closing statement?

While Agent Orange is characterized as He Who Must Not Be Named, Democratic candidates just can’t help themselves. Of course, Trump’s their ultimate rival, so even if he wasn’t living rent-free in their heads 24-7, they’d probably call him out. With “yes” trending at -300, this isn’t a lock, but it’s near enough of one.

Robert Francis “Beto” O’Rourke has a penchant for dropping an edgy F-bomb here and there. He was a young punk rocker once, after all. Of course, the FCC has rules against that sort of thing going out on the airwaves, and the DNC has reminded its candidates to can it on that front.

Politics means protesters, and while these debates are going to be heavily policed against that sort of thing, it wouldn’t be all that surprising to see some disenfranchised nobody make some small use of that outdated old First Amendment thing. Still, most bettors think a protest is unlikely in such a controlled environment, and “no” is pulling -400 odds.

Will Beto O’Rourke speak Spanish during the debate?