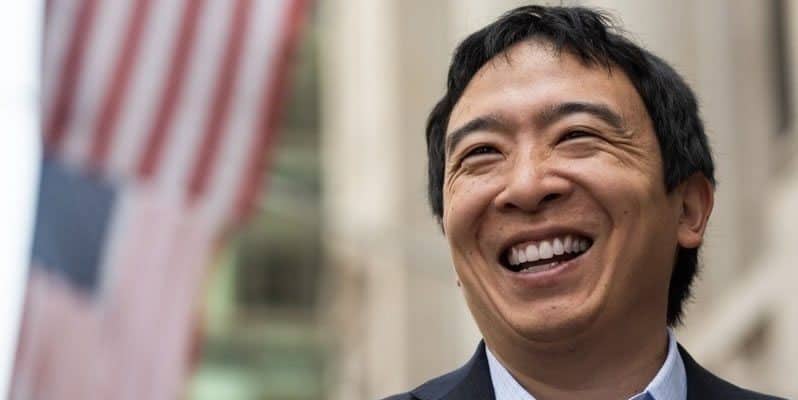 Andrew Yang is campaigning on giving you and me $1000, but for the moment, he’s giving Kamala Harris +1000, instead.

Harris, once a front-runner for the DNC nomination, has tumbled in the polls and at the books of late, still woozy from Tulsi Gabbard’s crushing blow at the second round of Democratic Presidential debates.

Now, Yang has effectively changed positions with Harris, moving up to +800 and forcing his competitor into triple digits for the first time.

While it’s easy to understand why Harris is losing ground on the field, there is no singular event in the past few weeks that has accounted for Yang’s rise.

The entrepreneur participated in CNN’s “Climate Crisis Town Hall,” but he stuck mainly to the talking points established by the field, from which nary a candidate diverged in any meaningful way. Yang also toes the party line on gun control and firearms confiscation, including an on-stage show of emotion.

These elements may not have helped Yang stand out. However, there are strengths of his campaign that could help him stand out, including his ability to connect with his base, innovative marketing and his willingness to be vocal on issues such as the legalization of marijuana.

Where Yang has likely improved his odds is simply in his campaign’s raison d’être, the so-called Freedom Dividend. Also called “universal basic income,” the Freedom Dividend is a monthly $1000 government-issued stipend for all Americans, rich and poor alike.

The purpose of the disbursement, according to Yang, is to offset growing job automation in the US, and it will allegedly be paid for by the institution of a European-style VAT (value-added tax) on goods and services.

In addition to the Freedom Dividend, other major platform policies for the Yang campaign include:

Still, as strongly as Yang has surged up the DNC betting boards, presidential election odds are not quite as rosy, but at +1600, his odds are currently better than those for most other Democratic hopefuls. Andrew Yang’s chances at becoming president may not put him at the front of the pack yet, but they are moving in the right direction to render him a potentially serous contender as the election nears.