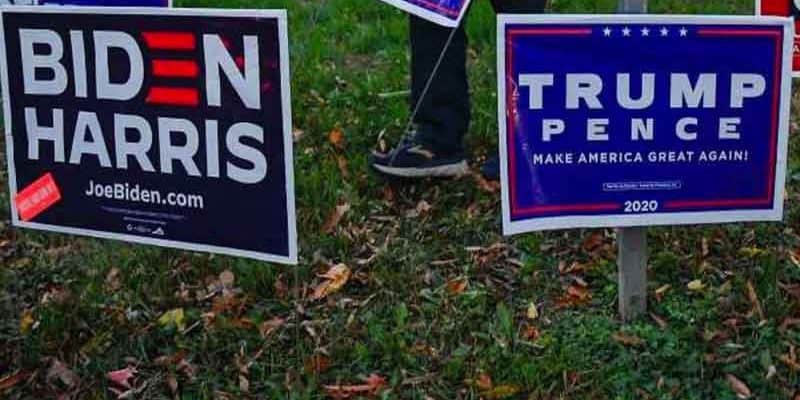 The 2020 Presidential election is not over until the fat lady sings, or in this case, until Rudy Giuliani stops sweating. Please, somebody, grab the poor (rich) man a towel.

As we all know, the Joe Biden vs. Donald Trump main event is wrought with allegations of widespread voter fraud that successfully delays an official certification of President-elect Joe Biden and his transition team.

And it is not just the Oval Office on standby. Many of our favorite sportsbooks are holding off on payouts for the Presidential election winner moneylines. If Biden consolidates a victory, it will be the single most massive score for bookmakers in political betting history.

The bookmakers currently sit on collective payouts of nearly a billion dollars, proving the 2020 Presidential election is the single most bet on event in history, topping insanely popular international sporting events like the FIFA World Cup.

Even with the electoral college officially still in limbo, some smaller gambling sites have already started cashing out on an anticipated Joe Biden victory.

We have settled the market with Biden the winner. As outlined in our rules any legal challenge to the result will not count.
All bets will therefore be settled on the party of the candidate who is publicly announced as the winner of the US Presidential Election.

Fred has paid out early on Joe Biden to become the 46th US President.#USElection2020 #USElection #USElectionresult2020 pic.twitter.com/qCFwwHx36C

But the industry-leading online sportsbooks, such as Bovada and BetOnline, have been reluctant to declare any winner.

“Although news networks have now projected that Biden got over 270 Electoral College votes, there is still some uncertainty around the outcome of the election given the possibility of recounts and potential legal challenges,” reported a Betfair representative.

“This has been a year of twists, turns, and unknowns, so we don’t want to prematurely grade a wager that could result in a different outcome down the road,” reported BetOnline sportsbook manager Dave Mason.

The significant sportsbooks are likely holding out in case of the very slight chance that Donald Trump wins the election, and then they would make payouts prematurely for both the winner and the loser. A similar situation happened in 2016 when the Irish gambling site, PaddyPower, lost nearly five million dollars after paying out bettors who voted for Hillary before the election was called.

One of our favorite political betting sites, MyBookie, is doing the same. They had to thwart a Trump bettor who wanted his bet to be nullified due to alleged election fraud. MyBookie quickly rejected the request.

Guy bets $27,000 on Trump, demands a refund due to baseless election fraud claims. MyBookie: “No” pic.twitter.com/rqFWLuJIPZ

If the election is called for Biden, not only are bettors who wagered on the favorite going to get paid out, but the sportsbooks are going to win BIG. The 2020 Presidential election’s unprecedented action, mainly including all the money from people who bet on another Trump underdog victory, makes this a massive score for bookmakers and bettors alike.