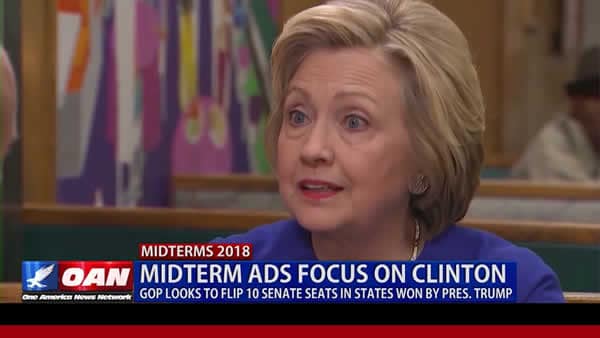 Hillary Clinton stepped away from politics after losing the 2016 presidential election to Donald Trump. You’d think the former Secretary of State would be absent from the current political climate, but it appears to be the opposite. A slew of campaign ads featuring Clinton are being used in more Clinton-friendly states to encourage conservative voters to go out and push GOP candidates forward.

According to research, almost 13,000 television ads have featured Clinton since January 1st to the end of April. A lot of the ads are being used in governor races in states that Clinton won during the presidential race. It appears the strategy is to use her as a polarizing figure. The ads entice conservative voters by hinting they either aren’t conservative enough or draw on comments she made about Trump’s campaign during a talk in India.

Clinton expressed that she won parts of the country that were forward thinking and Trump’s campaign was focused on those “looking backwards.” In light of these comments, the Senate GOP campaign launched targeted ads in states with 10 Senate Democrats, states that Trump won. The wording is like, “Clinton thought you were backwards, and if this Senate Democrat wins it will be more of the same.” Basically, Democrat incumbents in Trump states are in trouble.

The Democratic party believes these ads just further prove that the GOP is looking backwards. They are using Clinton as a smokescreen to promote a divisive agenda and avoid bringing up their own problems in Congress. The tax cut was one of the only things the GOP was able to pass and it hasn’t been received well. The GOP’s healthcare reform proposal was shot out of the sky. While this strategy may seem shaky, it is actually a smart move for the GOP in their attempts to maintain control of Congress.

Ohio, West Virginia and Indiana are 3 states with these anti-Clinton ads running. Interestingly enough, these 3 states have contested seats in the 2018 midterm Senate elections. With the GOP targeting these 3 states that Trump won by a wide margin, they are pushing Republicans in these states to vote Republican by associating Clinton’s losing campaign with other Democrats running for Senate seats. This strategy could work by reigniting the problems with Clinton that people had in the first place. The thing is, Clinton has nothing to do with the Senate elections.

Not all conservative pundits support this plan. Political commentator Tucker Carlson said that Republicans should not be using a recycled nominee as the focal point for their ads. Instead, Carlson feels the GOP should be pitching voters on what positive things can come from 2 more years of control in Congress. Some people still consider Clinton the head of the Democratic party, but this just fuels the argument that they either can’t get over her or are clinging to her as their saving grace in the GOP race.

Whether or not these targeted ads have an effect remains to be seen. The Democrats have more work cut out for them than the Republicans in do terms of maintaining control, but these ads seem to be more like a panic button. Perhaps the GOP is more worried about losing control than they let on to be.