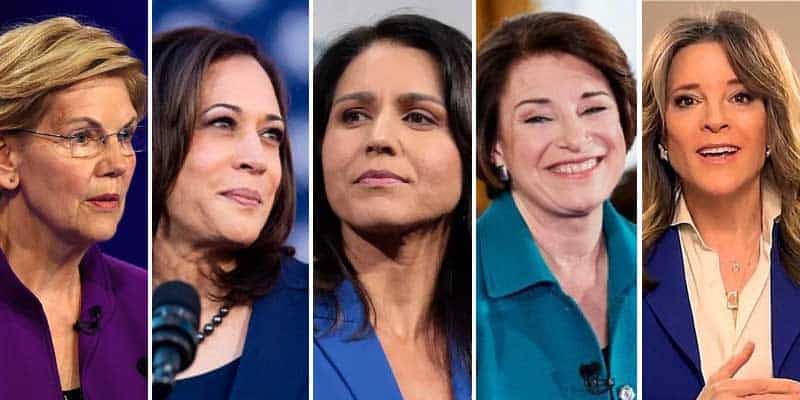 Earlier this week, we covered the top five Democratic candidates running for the United States Presidency in the 2020 election, based on their political betting odds.

Although the story included the frontrunning Elizabeth Warren, we defied an ancient decree set forth by Queen Latifah: “Ladies first!”

We know present this article to make up for our mistake. The following list features the women running for POTUS.

While some of these candidates have much better odds than the others, anything can happen in the political sphere.

Top 5 women in the Democratic Party running for President

As the Democratic Party’s frontrunner, and only trailing President Donald Trump in odds overall, Warren’s nomination chances are at their strongest right now. Along with Bernie Sanders, Warren is one of the party’s most far-left candidates advocating for tuition-free colleges, Medicare for All, and a ban on assault weapons. The Massachusetts senator’s +110 odds convert to a 47.62% chance of winning the Democratic nomination.

Just a few months ago, Harris’s odds of winning the party nomination led all Democrats immediately after the first debate in June. Peaking at +250, the future was bright for the California native. However, after weak showings in the subsequent debates and lackluster fundraising numbers, Harris has seen her odds fall drastically. Currently sitting on +3000 chances, Harris will need more than a quote-worthy anecdote to become the Democratic nominee in 2020.

Gabbard is the first Samoan-American to run for the US Presidency, although her nomination odds are not the best right now. Nevertheless, Gabbard remains one of the most interesting candidates in the Democratic Party. After the Hawaii National Guard Major was not able to qualify for the third debate in September, Gabbard met DNC thresholds to make it into the fourth Democratic debate. But, citing bias within the media and the party itself, Gabbard threatened to boycott the event before ultimately deciding to attend. Shortly after this, Gabbard made headlines again when Hillary Clinton allegedly claimed that Gabbard was a Russian asset being groomed for a third-party run in 2020.

Believe it or not, when she announced her presidential run in February, Klobuchar’s betting odds were in the top five, tying her with a party favorite in Sanders. Despite her strong support in her home state of Minnesota, which has kept her qualifying for all of the Democratic debate thus far, Klobuchar has yet to break into the party’s top tier of candidates. While the Midwesterner is not as liberal as some of the other left-leaning candidates in the race, Klobuchar plans to expand medical coverage and eliminate tuition at two-year colleges.

I know I just said that Gabbard was one of the most interesting Democratic candidates, but Williamson might actually take that title. Williamson is not exactly known for her stellar election odds, but instead is most famous for her interesting opinions and spirituality. Unfortunately for Williamson, who was once the spiritual advisor for Oprah Winfrey, the best-selling author has not been able to qualify for the last two Democratic debates. It is possible, though, that the “dark psychic force of the collectivized hatred” is still at work and that is what is keeping her odds so low.