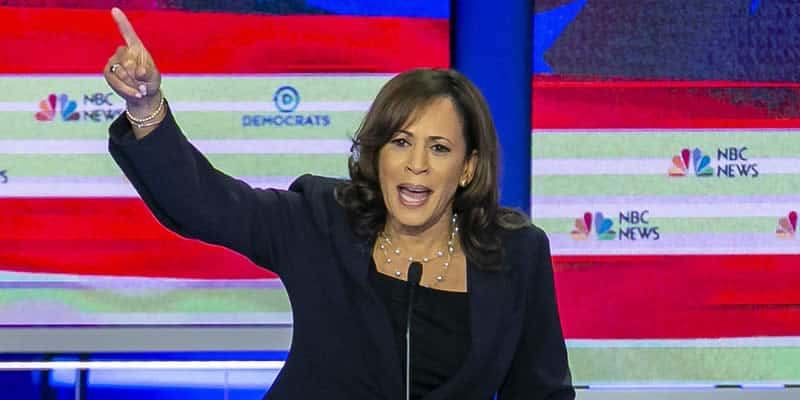 A picture is worth a thousand words, but a single debate can be worth four years in office.

Going into Thursday night’s debate, Sen. Kamala Harris’s odds were at +800 to win the Democratic primary election for 2020. She sits at +250, the best among Democrats, to win the party nomination. Biden is a close second, still, at +350, according to BetOnline.

When she first announced her plans to run for president in early 2019, Harris had odds between +450 and +500, depending on the sportsbook.

However, following announcements by Sanders, Biden, and Buttigieg, Harris’s odds fell, clearing the way for Biden to reign as the favorite to win the nomination.

After a strong showing by Warren during the first night of the debate, Harris’s odds fell even further, reaching an all-time low of +800.

Harris stole the show midway through the second night of the debate, calling at Biden on his support of former US Senators that opposed desegregation of school busing. She provided an emotional anecdote, describing that she was one of the students impacted by California’s slow integration action.

Biden, instead of apologizing for his past mistakes, defended his decision to combat busing ordered by the Department of Education.

If she wins the party nomination, can Kamala Harris beat Trump in 2020?

But, as she proved last night, and in the past six months, she can overcome the odds, even amongst her own party members, to come out on top.

While fluctuations are typical, especially early in the election cycle, Kamala Harris’s odds for winning in 2020 could hold steady are even improve more if she continues to deliver strong performances during debates.

If you missed the first two nights of the Democratic Debate, the second round of the debate will be Tuesday, July 30 and Wednesday, July 31 in Detroit, Michigan.

Hosted by CNN, The Detroit debate will feature a similar format of ten candidates per night over the course of two nights.

Odds can fluctuate in a matter of minutes, so look for a dramatic shakeup within the next month before the debate.