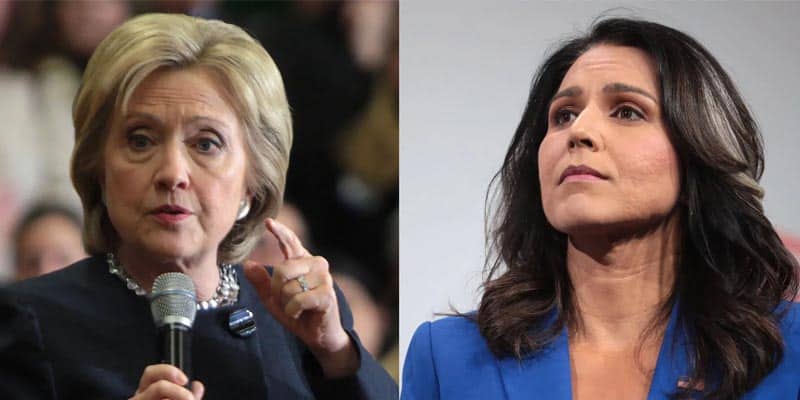 The “Sagan standard,” as it’s commonly referred to as today, is an aphorism we should consider applying to today’s political landscape, especially as we inch closer to 2020.

Or we can continue disregarding logic and reason to anything, choosing to float conspiracy theories without fear of retribution instead.

Today, 2016 Presidential runner-up Hillary Clinton chose the latter, and instead of taking the high road, made a choice to follow in the footsteps of the person who defeated her three years ago—President Donald Trump, who’s favored to win reelection in 2020 regardless of who the Democrats pick.

It’s beginning to look like Clinton is testing the waters to see if a 2020 bid is in the cards. She has been promoting a new book recently, but if you weren’t following the news day-to-day, it would look like she’s on a comeback campaign.

Heck, just over a week ago, the former Democratic nominee responded, “Don’t tempt me” to a Trump tweet where he dared Clinton to join the race in his typical schoolyard fashion.

And what’s sure to get plenty of headlines, Clinton appears to choose conspiracy over concrete fact when she appeared on the “Campaign HQ” podcast with former Obama adviser David Plouffe and claimed that the Russians are “grooming” Hawaii Representative Tulsi Gabbard to run third-party in attempt hand Trump the election next year.

“I’m not making any predictions,” said Clinton right before proceeding to make a faceless prediction. “But I think they’ve got their eye on somebody who is currently in the Democratic primary and are grooming her to be the third-party candidate.

“She’s the favorite of the Russians,” Clinton continued, cowardly avoiding saying Gabbard’s name. “They have a bunch of sites and bots and other ways of supporting her so far.”

Clinton provided zero, none, nada evidence to back up her extraordinary claims.

Gabbard’s odds show she has the 8th best chance to win the Democratic Nomination and is currently listed at +3300. Still a bit of a longshot, but she has repeatedly and openly stated she would not run as a third-party candidate if she does not become the nominee.

Clinton also singled out former Green Party’s nominee Jill Stein directly, adding, “That’s assuming Jill Stein will give it up, which she might not because she’s also a Russian asset.”

However, Gabbard did not stay quiet long, lashing out at Clinton on Twitter for her unsubstantiated claims

Great! Thank you @HillaryClinton. You, the queen of warmongers, embodiment of corruption, and personification of the rot that has sickened the Democratic Party for so long, have finally come out from behind the curtain. From the day I announced my candidacy, there has been a …

… concerted campaign to destroy my reputation. We wondered who was behind it and why. Now we know — it was always you, through your proxies and …

… powerful allies in the corporate media and war machine, afraid of the threat I pose.

It’s now clear that this primary is between you and me. Don’t cowardly hide behind your proxies. Join the race directly.

But Clinton will cowardly not enter the race. Being on the losing end of one of the biggest upsets in the history of politics likely was a blow to her ego.

And if Clinton enters the 2020 race, it would pretty much confirm she’s a sadist.

Because how could we forget: Clinton is the Democratic candidate who neglected to visit and lost in Wisconsin, Michigan, and Pennsylvania—all three states by a combined 77,744 votes after Obama carried those states four years prior.

Perhaps the most ironic takeaway from all of this is that if Clinton was to jump into the race now and receive odds for the Democratic Nomination, then she would unquestionably upset the balance of the field currently running and may even gift wrap Trump the White House—again.

And right now, there’s no evidence backing up Clinton’s claims against Gabbard.

And there’s certainly nothing showing that’d she’d have a remote chance against Trump in 2020—or even the other top Democrats at the moment.

In fact, Clinton entering the race tomorrow would do more damage to the Democratic Party than Gabbard or any of the other candidates could ever dream of doing if they were, in fact, Vladimir Putin’s puppet.

But I won’t stoop to Clinton’s level and float conspiracy theories. I believe in “extraordinary claims require extraordinary evidence.”

I suggest Clinton do the same, or—at the very least—just get over 2016 already.