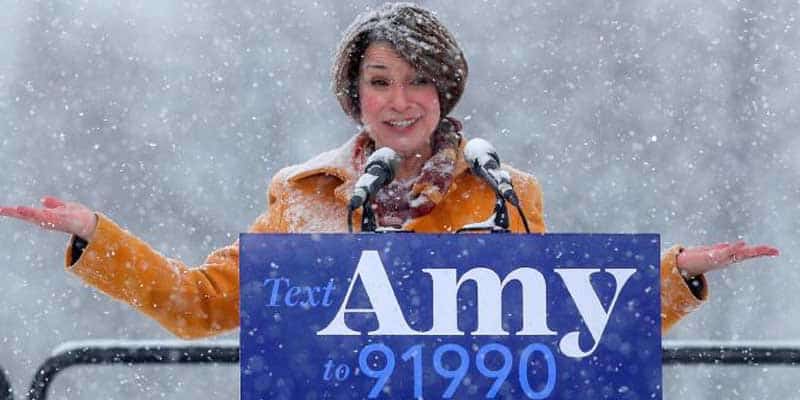 Even a snowstorm wouldn’t stop her from entering the race for the White House.

Minnesota U.S. Senator Amy Klobuchar entered the 2020 presidential race on Sunday, announcing her campaign despite blizzard conditions that frequently covered her in snow throughout her speech.

Some people believe she could be a dark horse candidate and enters as the one Democratic who could truly challenge President Donald Trump.

And oddsmakers at BetOnline like the Minnesota Democrats chances of winning in 2020 and becoming the next President of the United States, giving Sen. Klobuchar odds that put her in the top 5 favorites to win it all next November.

She is currently listed at +1400, which puts her in a tie for 5th place with Vermont Senator Bernie Sanders, who has yet to launch his campaign to seek the 2020 bid but is expected to make an announcement soon.

Sen. Klobuchar is sandwiched between a growing field of Democratic favorites. Behind her in a three-way tie at +2500 is New Jersey Sen. Cory Booker, Massachusetts Sen. Elizabeth Warren, and New York Sen. Kirsten Gillibrand — each has already launched their campaigns.

Ahead of her in the odds is former Vice President Joe Biden (+1200) and former Texas Rep. Beto O’ Rourke (+1000), and neither have officially announced they will launch campaign, though, they both are expected to in the coming months.

Finally, the top favorite for the Democrats at the moment is California Sen. Kamala Harris, who sits at +800 after launching her 2020 campaign in January.

Holding firm as the overall favorite is President Donald Trump, who currently sits at +150 and will likely receive the Republican nomination due to being the incumbent.

After Sen. Klobuchar made her campaign announcement, President Trump chimed in on Twitter with his thoughts.

Well, it happened again. Amy Klobuchar announced that she is running for President, talking proudly of fighting global warming while standing in a virtual blizzard of snow, ice and freezing temperatures. Bad timing. By the end of her speech she looked like a Snowman(woman)!

And it didn’t take long for Sen. Klobuchar to snap back, marking the first exchange for what could be the two nominees for both political parties in 2020.

Science is on my side, @realDonaldTrump. Looking forward to debating you about climate change (and many other issues). And I wonder how your hair would fare in a blizzard? ☃️