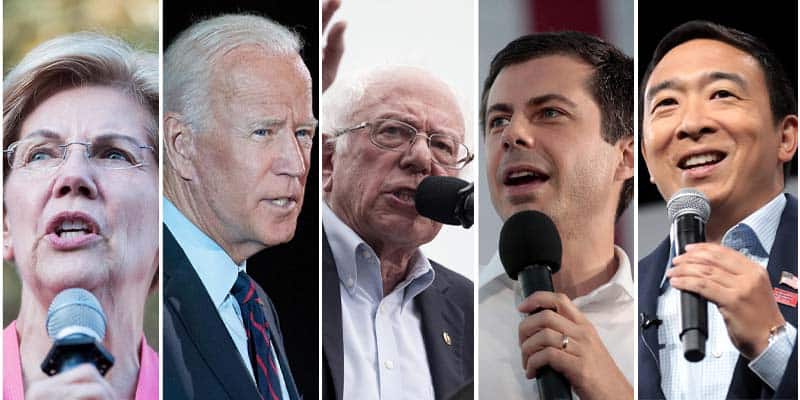 The public betting market for politics can change on a dime, and you don’t need to look any further than the 2020 Democratic Nomination odds this year to see proof of that.

Remember when Kamala Harris and Beto O’Rourke were the favorites back in January?

Remember how Elizabeth Warren plummeted on the board following the report of her claiming to be “American Indian” when she registered with the State Bar of Texas?

Remember everyone debating whether Joe Biden was going to jump into the race but surprising no one when he actually did?

Heck, did anyone even know who Pete Buttigieg or Andrew Yang were when 2019 began? Maybe you did, but I’d need to see some evidence backing up your backing of either candidate.

In fact, the only Democratic candidate that’s consistently held a top 5 chance of winning the nomination this entire time has been Bernie Sanders.

And with the latest odds of becoming the Democrat nominee showing 5 candidates who are head and shoulders above the rest, let’s take a look at their chances, but just keep in mind: You never know what tomorrow may bring, especially in politics.

Top 5 Democrats With The Best Chance To Win The Nomination

*According to the latest 2020 Democratic Nomination betting odds at BetOnline.

Warren’s nomination chances seemed all but dead in the water back in the Spring, but the Massachusetts Senator saw her odds rise during what may go down as “Warren’s Summer Surge” if she does win the nomination. With almost one year to go until the general election, Warren is the favorite, and her odds imply she has exactly a 50% chance of becoming the Democrat nominee at this stage of the 2020 race.

After spending a good part of the year atop the board once he officially launched his 2020 campaign, Biden’s odds began to slowly fall as Warren’s began to rise. The former Vice President under Obama has consistently slid in the polls following each debate performance, and his nomination implied probability rests at 16.67% for the moment. His name carries a lot of power with voters who are still unfamiliar with a lot of candidates, and he’s by no means out of the race just yet, but he’ll need to stop falling—and fast if he wants to stay alive.

Speaking of staying alive: Even a heart attack can’t stop the machine that is the odds for Bernie Sanders. As mentioned above, no candidate has held a top 5 spot the entire year except for the Senator from Vermont. His Democrat nominee chances dipped slightly after reports surfaced of his heart attack, but rebounded following a strong performance during the fourth debate and also big-time endorsements from two members of The Squad. With the donations continuing to flow and tons of fundraising money in the bank, Sanders might currently have the best value, 11.11% chance of any candidate on the board.

Tied for third place with an 11.11% implied probability to win the Democratic nomination is the South Bend Mayor with the last name that no one could pronounce correctly until a couple of months ago. Mayor Pete’s odds climb coincided with his rise in the polls, and after arguably his best debate performance of the primary season, he just got an Iowa poll that has him on the heels of Biden and Warren. Buttigieg has also been raking in the donations during the past two quarters and like Sanders, may also be a valued bet as October comes to a close.

And lastly, we round out the top 5 best odds to win the 2020 Democratic Nomination with perhaps the best all-around story of the primary season. At the start of the year, Andrew Yang’s odds were considered such a longshot, that most political betting sites didn’t even have him on the board. Despite never holding political office—and not being silver spooned into wealth like a certain candidate in 2016—the fact that Yang has made it this far is quite the accomplishment. His current 9.09% chances are slightly lower than the odds he had prior to the debate, so the New York entrepreneur will need to start surging in the polls if he wants to put his campaign in a position to win when 2020 rolls around.

The Rest of the 2020 Democrats

The next closest candidate to the top 5 Democrats on the board is former favorite Kamala Harris, who currently sits in a distant sixth place with +2500 odds, 3.85% chance to be named the party’s nominee. The rest of the candidates range all the way to the other former favorite,  Beto O’Rourke, who’s at +6600 odds, 1.49% chance.

Here’s a look at the complete odds board for the Democrats at BetOnline. There’s still a decent ways to go in the race, but the clock is ticking. For the candidates that are not in the top 5: It’s time to make a move because the clock is showing that it’s now or never.