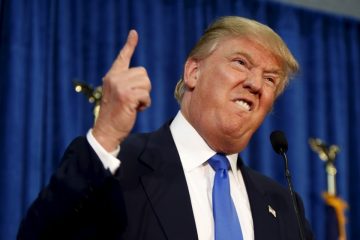 If there are two words that could accurately depict President Trump’s tenure in office so far, they would be “dumpster fire”. From lying about how many people were at his Inauguration, executive order after executive order, accusations of colluding with Russia throughout his administration, resignations in key positions and his never-ending Twitter feed, President Trump has seen a rough go of things since taking over—most of it self-inflicted.

Popular online sportsbooks that offer political betting odds are including a line on whether Trump will remain in office for his entire 4-year term, and the majority of bettors are taking the “No” bet. The way things are going, it is easy to see why.

Things got off to a rocky start right out of the gate for President Trump. The day after his Inauguration, thousands of women gathered in Washington, D.C. to voice their disapproval of Trump’s proposed policies. Not long after that, Trump issued a string of executive orders, including one to extend production of the Keystone and Dakota Access Pipelines. This did not sit well with environmentalists.

On January 27, he issued another executive order imposing a travel ban denying entry into the US from certain Muslim countries. Keep in mind, this is all within his first 8 days in office. In early February, National Security Advisor Michael Flynn resigned amid allegations of colluding with Russian officials on national security issues. This would end up being the first of many resignations.

One of Trump’s first goals was to repeal Obamacare. His team drafted the American Health Care Act, with Paul Ryan championing it. The bill was met with much disapproval and controversy, delaying its vote. The Republicans were forced to go back to the drawing board. The same thing happened with his Tax Reform plan.

Scaramucci’s tenure only lasted 10 days before he was dismissed, showcasing the inconsistency of the overall administration. Now, Chief Strategist Steve Bannon has resigned. Most believe it is a result of the recent activity in Charlottesville.

Speaking of that, a group of Neo-Nazi protestors broke out in Charlottesville, Virginia, much to the chagrin of just about everyone else in the country. Trump commented on the issue, saying there was faults on both sides, without initially singling out the white nationalists.

He corrected this err within a few days, however his is ability to poorly handle issues like this, issues which many believe have been fostered since his controversial campaign, is a red flag to many. Trump’s struggles to reflect the position that Americans so desperately want from him regarding racially charged situations will undoubtedly affect election odds for 2020 and upcoming races for republican politicians.

All in all, Trump is facing a rocky start to his Presidential term. With his revolving door administration, alleged ties to Russia and xenophobic outfits, mishandling of national crises and his lack of filter, Americans are getting more fed up each day.

Betting lines are still open on whether he will remain in office, and you guessed it—the majority still believe he will be impeached or resign before his 4 years are up. It stands to reason that as the republicans seem to be floundering with getting anything accomplished, seriously disappointing their constituents, that they are likely boosting the Democrat betting odds for taking over in 2020.