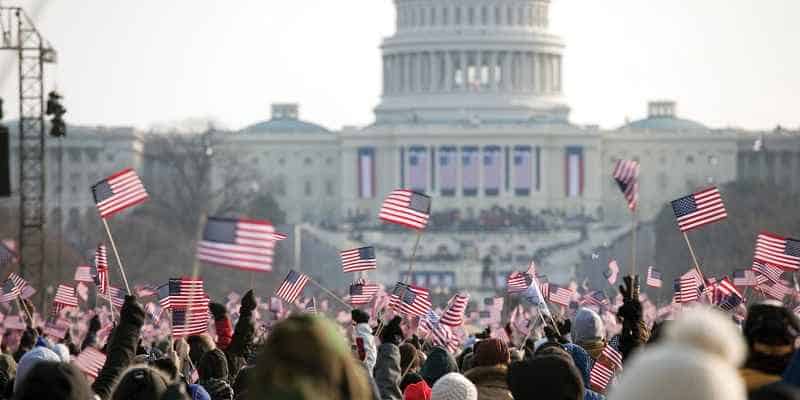 With the 2021 Presidential inauguration of Joe Biden less than a week away, the best election betting sites have put up a host of political props on the event.

While there will be no crowds on hand for the event due to the January 6 protests and break-ins on Capitol Hill, the Biden inauguration should go ahead as planned, and several online sportsbooks are offering wagers on various elements of the affair.

Most of the best political props come from MyBookie, and while they’re reasonably sedate, any chance to win a few bucks is welcome right now.

Here are our favorites:

Which Amtrak train will Joe Biden use on Inauguration Day?

This is a weird one, because we never really considered that a public figure of import – particularly a President-elect surrounded by hundreds of Secret Service agents – would use public transportation to travel to any event, much less their own Presidential inauguration.

In fact, we were so skeptical that we had to look up whether or not Biden actually ever made any sort of statement that he planned to do this.

And it turns out he did!

However, amid new security concerns, some news outlets are reporting that Biden will no longer use Amtrak to travel to his inauguration.

Still, you can bet on this line if you want, though it’s probably a waste of money, and there are definitely better props to choose from.

Will Joe Biden take his Oath of Office in front of the Capitol Building?

That’s what Presidents do, and Joe Biden is the President-elect. The “Yes” at -500 seems like a pretty decent payout for what should be a dead cert, as we wouldn’t be surprised if it were trending at -10000.

Still, given the potential for security issues to cause plan alterations at the last second, the “No” at +250 could be a smart move, too.

We have no real advice for this one, as it has “bad beat” written all over it.

What color of tie will Joe Biden wear at his inauguration?

The so-called Purple States (or Swing States) carried Biden to victory in the 2020 general election, so a shoutout to all his supporters there seems fitting.

We’re guessing that the favorite here is the best bet, and those -150 odds are pretty good. Blue is the Democrat color, and the party just secured a federal government trifecta, after all. It’s a big win.

That said, a red tie would be a pretty epic troll…

Will Joe Biden greet Mike Pence at the inauguration?

MyBookie specifically defines such a greeting as a “handshake, fist bump, or elbow bump.” Due to coronavirus social distancing protocols, this seems unlikely.

However, Pence is a popular establishment Republican once again, and in the interest of healing the nation, this could be a smart move for both sides of the aisle.

Will Joe Biden be photographed on the White House balcony on Jan. 20?

Honestly, we have no frame of reference for whether or not this is a customary thing for Presidents to do on Inauguration Day. It…seems like a thing?

Regardless, bettors certainly don’t think he’ll do it, and by a wide margin. Perhaps the rationale here is that there might be some security concerns with such a move.

On the other hand, the White House isn’t particularly susceptible to breaching by bad actors, and Biden likely wants to maintain some sense of tradition and dignity as best as possible given the untraditional (and often undignified) 2020 we’ve all just endured.

Will Joe Biden attend the Jan. 20 virtual inauguration event in the Oval Office?

Biden has participated in plenty of virtual events during the 2020 campaign cycle due to the coronavirus, and there’s no reason not give all the millions of people live-streaming this thing a nice cameo appearance.

Plus, for us, this is another coin-flip, so the “Yes” at +110 is the better payout and the better risk, regardless.

Will Joe and Jill Biden dance together at the virtual inauguration event?

If they attend it (and we think they will), then definitely.

There’s plenty of precedent for Presidents to dance with their wives on the most important day of their professional careers, and with Jill standing by Joe every step of the way during 2020, a dance seems like a fitting gesture.

We just wonder which one will take the lead!

In addition to the above Joe Biden props, MyBookie also has a few Donald Trump odds for what the outgoing President will be doing come January 20.

These are pretty mundane compared to past Trump betting lines, but if you think you have the inside scoop, you can scoop up some good money wagering on the following:

Will Donald Trump be in Washington DC on Inauguration Day?

Trump has announced that he will not be attending Biden’s inauguration, but that doesn’t necessarily mean he won’t be in DC on January 20.

Still, you’ll want to act fast on this betting line, because it likely won’t be up for much longer. As soon as Trump even hints at his upcoming schedule, this one will close.

Honestly, we think the favorite here is the right call. Trump is probably pretty keen to get out of Dodge at this point.

Will Trump be in Mar-A-Lago on Inauguration Day?

Mar-A-Lago is Trump’s primary residence, so it’s a good bet that that’s where he’s headed as soon as he’s done in Washington (and maybe even sooner, since he’s already effectively done – for now).

As a side note, bettors should remember that this line does not preclude or replace the above prop. Trump could be in DC and in Florida on the same day, so taking the “Yes” on both lines – and winning both bets – is not out of the question.

Will Donald Trump Jr. be suspended from Twitter on Jan. 20?

It isn’t a stretch that Dorsey and Co. would suspend Junior’s account for at least a few days before and after Biden’s inauguration.

Thus, if Trump, Jr., is locked out before Inauguration Day, the bet wouldn’t hit. This is precisely why “No” is so heavily favored, in our opinion.

We like the over here, as do most bettors.