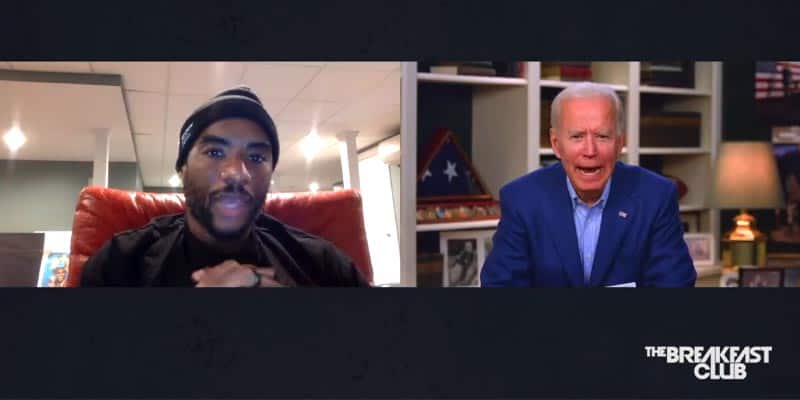 Biden: ‘You Ain’t Black’ If Voting For Trump — Is Betting OK?

Joe Biden sparked controversy on Friday when he suggested black Americans “ain’t black” if torn between voting for him or President Donald Trump in an interview with Charlamagne Tha God, a host on The Breakfast Club — a nationally syndicated radio show popular with black millennials.

The 2020 presidential election odds were also updated at Bovada Sportsbook before the interview took place.

The presumptive Democratic nominee had started to gain ground on the Republican incumbent in the eyes of political bettors after Thursday’s Fox News poll showed more Americans trust Biden over Trump in regards to who would do a better job on the coronavirus.

Additionally, Hillary Clinton’s 2020 odds are now +1800 ($100 bet would win $1800) as the Democratic Party establishment continues to flirt with a potential swap at the convention if the Biden continues to look shaky heading into the November 3 general election.

May 22 — Odds courtesy of Bovada

Will Black America Bet On Biden?

Numerous media outlets are reporting a “contentious radio interview” with Biden, but that appears to be more of a result of Charlamagne Tha God, who is black, taking it upon himself to press the Democratic nominee favorite on a wide array of issues facing the black community, who are among the most vulnerable in the United States during the pandemic.

Here’s the full Biden interview from The Breakfast Club:

Did you miss @JoeBiden on @breakfastclubam this morning??? Well here you go!!! https://t.co/FF2X3U1OqT

The “controversy” arose when Biden, the former Vice President to President Barack Obama — our nation’s first black POTUS — appeared to get flustered when Charlamagne Tha God brought up his positions, such as his 1994 crime bill, which are generally seen as doing more harm than good for black America.

The host then asked Biden to come back on The Breakfast Club, adding, “It’s a long way to November. We’ve got more questions” before the former VP defended and compared his voting record next to Trump in the most shallow way imaginable.

“I tell you if you have a problem figuring out whether you’re for me or Trump, then you ain’t black,” said Biden, who is white, cracking a smile before Charlamagne Tha God immediately responded with “it has nothing to do with Trump. It has to do with the fact that I want something for my community.”

Biden quickly responded: “Take a look at my record. I extended the Voting Rights Act for 25 years. I have a record that is second to none. The NAACP’s endorsed me every time I’ve run. Take a look at the record.”

Supporters of President Trump quickly lashed out at Biden’s “you ain’t black” comments, including Tim Scott — the only black Republican in the US Senate — who lept to the GOP incumbent’s defense alongside the Trump War Room posting quotes from black Trump backers, such as rapper Kanye West.

1.3 million black Americans already voted for Trump in 2016. This morning, Joe Biden told every single one of us we “ain’t black.” I’d say I’m surprised, but it’s sadly par for the course for Democrats to take the black community for granted and brow beat those that don’t agree.

"I will not be told who I'm gonna vote on because of my color." – Kanye West pic.twitter.com/YcHJyfGM8B

There is no question that Biden will win the black vote on November 3, but whether Trump can earn more than 8% — 88% voted for Clinton in 2016 — remains to be seen.