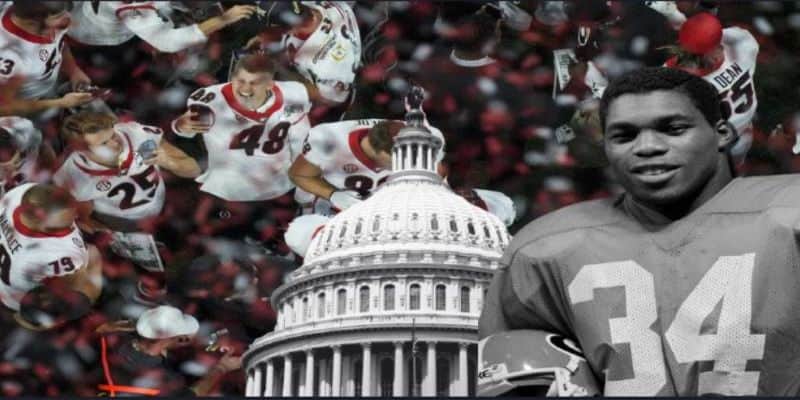 There hasn’t been much chatter about Herschel Walker’s Georgia Senate campaign since he dropped the news in August. And as the conversation has stagnated, the political betting lines have too.

But in light of Georgia’s success in the CFP championship, that may soon change.

Herschel Walker first became a beloved figure of the Peach State in 1980. He played football for the Georgia Bulldogs and helped the team secure a national title for the first time in almost 40 years.

After winning the Heisman trophy in 1982, Walker went on to play for a handful of the country’s top NFL teams. Walker remained deeply saturated in sports until 1999. Still, he wouldn’t enter the political landscape until 2014.

Since then, Walker has become a frequent face on conservative talk shows, often appearing with his son. The former football star gained even more authority and name recognition after serving alongside Dr. Oz on the President’s Council on Sports, Fitness, and Nutrition.

Consequently, the two both felt that this year’s Midterms would be the prime time to run for office. But unlike Oz, Walker’s Senate campaign is going oddly well so far.

Dr. Oz to Win US Senate in Pennsylvania?

Herschel Walker has received public endorsements from both Donald Trump Sr. and Mitch McConnell, two key figures of the GOP.

The former athlete’s only competitor is GA Agriculture Commissioner Gary Black, whose campaign has had little to no traction since he announced it in June of last year.

Still, the race has yet to intensify and the Midterms have been historically dirty. To be fair, Walker has a lot under his belt that may resurface and be used against him.

The star has previously been very open about his struggle with Dissociative Identity Disorder (DID). In 2008, Walker wrote a book that described his life living with several, sometimes violent, alters or personalities.

Even so, the people’s love for Walker as a sports and political icon could certainly overshadow any feelings of doubt. At least in the primaries.

Football has an important place in the hearts of Americans. That significance has been the driving force for many legislative decisions; namely, sports betting. It would be unsurprising to see this favorability extend to congressional chairs.

Political bettors should keep their eyes on the trends of the 2022 Midterm Elections. Party performance during this race will be a preview of what to expect in 2024.

If the GOP’s coverage is strong enough to take back the Senate, Democrats could face yet another rough election season.

And if candidates like Walker and Oz take on these seats, Trump’s post-election influence will be officially confirmed.