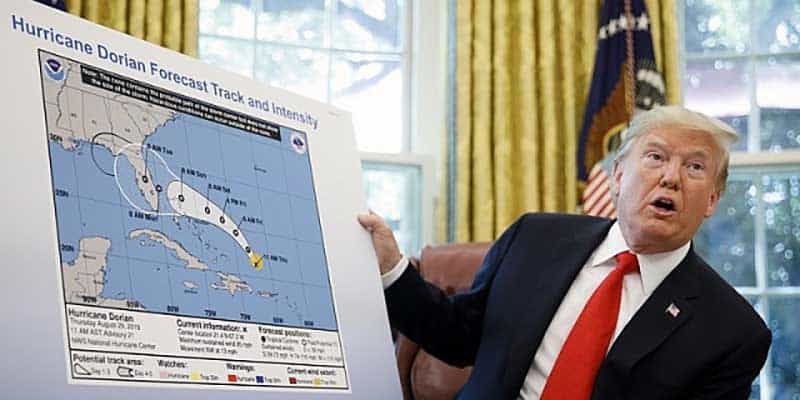 On September 4, with Hurricane Dorian bearing down, President Donald Trump held a now-infamous press briefing about where the storm might make landfall in the United States.

Holding up an NOAA-branded hurricane projection map, Trump stated that southeastern Alabama was “going to get a piece.” Since the map as printed didn’t show that data, Trump – or a White House staffer – used a black marker to extend Dorian’s effects into Alabama (or Mississippi, if you’re CNN).

Obviously, this gross lapse in protocol – maps are only supposed to be edited on computers, not by hand, you big orange dummy! – delighted the mainstream media, with most outlets quick to pile onto the perceived gaffe.

Of course, some early projection models did actually show that Alabama was at risk to experience unusually strong winds as a result of Dorian’s landfall across Florida. And in places not prepared for such, those kinds of high winds can do plenty of damage.

“The only probabilistic measure of an impact on Alabama ever issued by the National Hurricane Center was a product that predicts the chance of tropical storm-force winds of 39 miles per hour or greater occurring in a five-day period.”

In other words, Trump has again brazenly violated American law.

The real question, of course, isn’t whether or not Trump will be held accountable for his egregious misdeed. Instead, it’s how this latest unprecedented outrage will affect his Presidential election odds.

Well, as they currently stand at most betting sites, Trump’s re-election odds haven’t budged from their current +110 low.

The irony in all this is that so many of the official Hurricane Dorian projections – properly mocked up in computer imaging software and everything – turned out to be completely wrong anyway, as is often the case when predicting hurricane paths.

It’s impossible to tell if #Sharpiegate will negatively affect Trump’s re-election chances. However, given all the other alleged scandals the president has weathered to date, it’s unlikely that telling Alabama residents to secure their windows and lawn furniture will be the tipping point.

This doesn’t even seem like a blip on the radar.

The reality is simple: Trump’s base will agree with him that the media’s gleeful criticisms are #FakeNews, while his detractors will add it to the pile of high crimes and misdemeanors for which Trump should be impeached, like, yesterday.

The news cycle, like the weather cycle, tends to repeat itself.