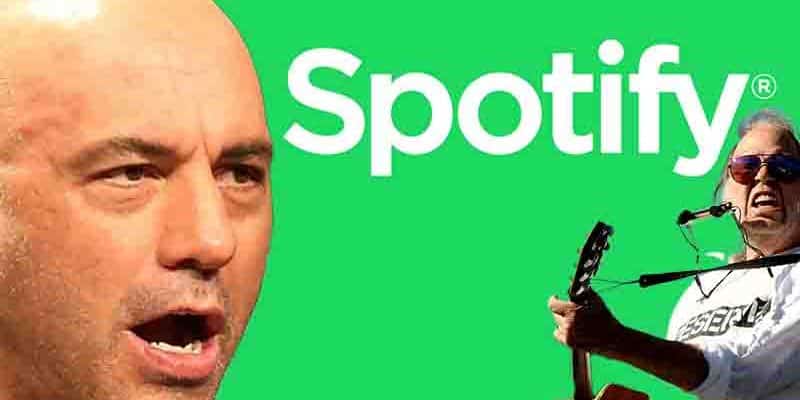 Canadian rocker Neil Young is not a fan of conservative podcaster Joe Rogan.

In an era where corporate dollars dictate the parameters of political expression, despite what you may think about Young, it is refreshing to see an artist buck the prospect of additional revenue to stand for what they believe in.

A political prop bet has appeared at online sportsbooks that differ in their projections for Spotify and Joe Rogan’s business relationship going forth.

The first suggests that Rogan will not be canceled or removed from Spotify’s servers prior to midnight on December 31, 2022.

Will Joe Rogan Be Cancelled From Spotify In 2022?

Wagers of $3.00 will be required to net a dollar on the above political betting odds that imply a strong likelihood of Rogan’s tenure being extended indefinitely, but what would it take to change that status?

Is there a musician or perhaps another podcast that is hosted on Spotify that is gargantuan enough to convince company brass that it is time to cut Rogan loose?

The following odds for current event betting suggests that Spotify will end its contract with Joe Rogan, resulting in his removal from their hosting services.

Will Spotify End Its Deal With Joe Rogan

What’s odd about the above prop is that there have been no additional conditions granted by MyBookie, the sportsbook that posted the line. Doesn’t that mean an outcome of “yes” is a certainty and should be wagered upon now?

That may be sound logic, but the timeline for a payout could outlast your own lifetime depending on your current age. No matter what, Rogan’s Spotify contract will terminate at some point in the future, but it could be over a decade before that happens.

How will an outcome of “no” be judged and at what point with that decision become concrete? There are more questions than answers in regard to this prop bet so maybe hold off until more clarity is provided.

List Of Artists That Pulled Their Music From Spotify

The above liberal-minded artists have put their money where their mouths are and have departed the Spotify platform because of their decision to retain Rogan, but who is next?

The following prop allows for betting on Michelle Obama and her husband, former President Barack Obama, and whether or not they’ll yank their content from Spotify and pile on the bandwagon.

Will The Obama’s Leave Spotify

The betting odds indicate that the Obama’s will indeed opt to depart Spotify but that will not likely sway company execs to cut Joe Rogan.

The artists that top the Spotify streaming charts at the moment are Drake, Bad Bunny, and Ed Sheeran. Could a combo of those three, or perhaps another major musician that simply isn’t pushing material right now, be enough to move the needle on Rogan?

Probably so, but that hasn’t happened as of February 9th. Laying some action on any of the above political prop bets is required to collect cash payouts, so be sure to take advantage of them before something happens to Rogan and they’re all removed from the boards.