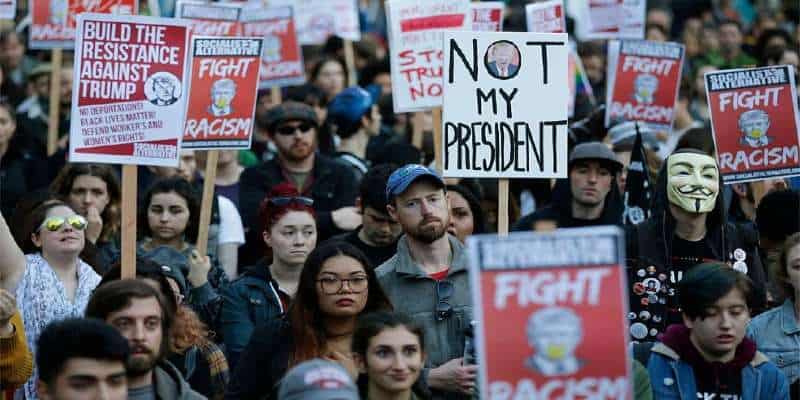 Tensions are growing in downtown Seattle, as protests regarding unwarranted police violence toward African Americans are reaching a fever pitch.

Seattle City Council Member Kshama Sawant allowed protesters into the City Hall building on Tuesday to pressure Mayor Jenny Durkan to resign because of her ineffectiveness in addressing issues with the Seattle Police Department.

For several days now, the protesters declared the area surrounding the Washington state capital building a police-free zone, setting up barricades and establishing a pseudo-secession plan.

Now, President Trump has doubled down and is stating his intent to intervene with the US military if city and state officials cannot get a handle on the situation.

Radical Left Governor @JayInslee and the Mayor of Seattle are being taunted and played at a level that our great Country has never seen before. Take back your city NOW. If you don’t do it, I will. This is not a game. These ugly Anarchists must be stopped IMMEDIATELY. MOVE FAST!

Mayor Durkan was quick to respond, suggesting that Trump should leave the governing to the “real” politicians and retreat to his bunker, a reference to the President’s supposed shelter “inspection” as reported by CNN last month.

Make us all safe. Go back to your bunker. #BlackLivesMatter https://t.co/H3TXduhlY4

Although Trump’s Presidential election odds have been slipping into subterranean levels as of late, his voter base is still holding strong. For evidence of this, have a look at the comments posted on Mayor Durkan’s tweet.

That’s not a good sign for the Mayor and her reelection chances, as Seattle and the state of Washington leans so hard to the left that electoral college betting odds for the region are not available at most major political sportsbooks.

The president also called out Washington State Governor Jay Inslee for his lack of response to the protest just outside his office. Inslee also saw fit to fire back via Twitter.

What we will not allow are threats of military violence against Washingtonians coming from the White House.

The U.S. military serves to protect Americans, not the fragility of an insecure president.

On the other side of the political coin from Trump, presumptive Democratic Presidential nominee Joe Biden and his campaign have once again gone dormant.

Over the course of the last two weeks, Biden has climbed out of his election odds hole and now holds an advantage over President Trump at some online sportsbooks, and is drawing close to even at others.

This is a drastic change from just one month ago where some betting sites had Biden listed as a 65-point underdog or worse.

The major shift in the odds came after Biden spoke in Philadelphia last week, offering measured words in support of the protesters and harsh criticisms leveled at the President and his response.

So why are Biden and his campaign remaining silent now?

Another timely address promoting unity has the potential to deliver a death blow to Trump’s election odds, so why the hesitation?

It would seem that Biden and his team are content to allow Trump to shoot himself in the foot, but that could backfire. If the past has taught us anything, it is that Trump will not stop taking shots. Ever.

Trump keeps the forward momentum going without concern for a presumed misstep taken just hours earlier. No response from his opposition is exactly what Trump wants, because eventually, voters and bettors will associate that silence with weakness.

We’ll figure it all out in a few more months.