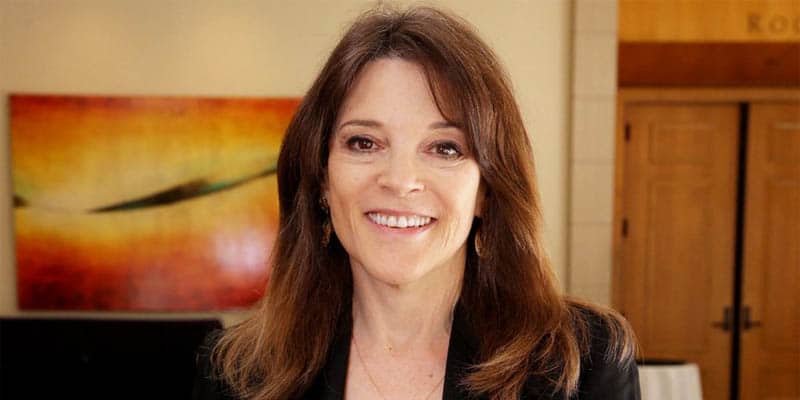 Spiritual Leader Turned Politician Tries A Go At The Presidency

Self-help author and spiritual leader to Oprah Winfrey, Marianne Williamson, is entering the 2020 Election on a different set of values.

Marianne Williamson publicly announced her run for the Presidency on January 28th, 2019 as a Democrat. She is the author of 13 self-help books and was an early activist for the HIV/AIDs crisis in the ’80s, and also became an early activist for encouraging women to go into politics. She has started various charities, non-profits, and foundations around these ideas like Project Angel Food, the Center for Living, and Sister Giant.

The 2020 Presidential Election won’t be her first try at politics though, Williamson ran as an Independent for the California US House of Representative 33rd congressional district seat in 2014 and raised 2 million dollars. Unfortunately, she did not place in the top two of the state’s Primary to make it to the General Election – the seat she aimed for was later won by Democratic Representative Ted Lieu.

Though, Williamson hasn’t given exact details on how she will accomplish these goals and often reverts back to spiritual dialogue. While Williamson may not have much experience in office, Donald Trump’s inauguration as a President with absolutely no political, or even military, experience has essentially removed that required qualification. Rather, charisma and money may be all a candidate needs anymore since the formula worked so well for Trump.

However, Williamson’s approach to the Presidency is unlike Trump completely. Rather than be absorbed by self-interest and gain, Williamson believes she will be fulfilling a higher purpose by attempting to correct the pathway our nation has taken. While sportsbooks may not consider Williamson to be a true contender at this moment in time her campaign launch is still fresh.

Williamson was well-received on her speaking tours and if her campaign develops larger and support grows, she may find herself included on the presidential election odds board. However, whether she will be able to represent the Democratic party as a primary pick and face Trump may be another question entirely. If so, the odds would be largely stacked against her, unlike other candidates considered.