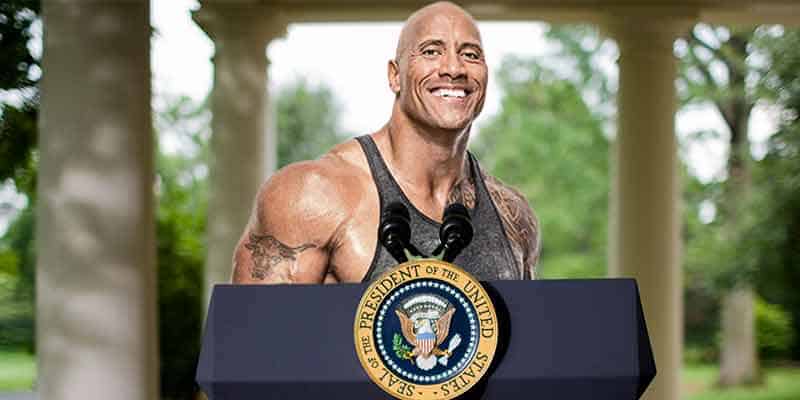 As political oddsmakers gear up for betting on the midterm elections, there’s always an eagle eye kept on the next Presidential election cycle and the potential candidates that could enter the race and become major players.

In the ever-growing room of political betting, the elephant contained therein is former President Donald J. Trump. He proved that someone from outside the realm of politics could become the elected leader of the United States, and that their celebrity status could be used as a benefit and not a burden.

Online sports betting sites have that in mind when projecting the 2024 Presidential Candidates, and we can smell something cooking in the election odds that suggest another celebrity is poised to make waves.

The above table comparing what top sportsbooks have posted in regard to political futures odds reveals that betting on Dwayne “The Rock” Johnson to become President in 2024 can pay out handsomely if he wins the next election.

While it may appear that he has loads of contenders to deal with, the Rock has only uttered half-hearted whispers of his intentions running for President in the future with no indication of a timeline.

He backed President Joe Biden in the last election, so that should only hurt his odds of running against him. However, Dwayne Johnson’s current moneyline grants him a much better chance of winning than the likes of Kanye West who actually appeared on the ballot in many states in 2020.

That’s important because if “The Rock for President” campaign actually launches, his odds will likely move much closer to even. The 2024 elections could become more intriguing if Johnson were to run as an independent as opposed to aligning himself with the DNC or Republican Party.

Betting odds for Dwayne “The Rock” Johnson to become the 2024 Presidential Nominee for the Democratic Party or the GOP are absent from the boards at the moment, and that is because there is a lack of certainty as to which side of the aisle he falls on.

Sure, The Rock supported Biden in 2020, but it can be assumed that he was merely opposing Trump instead of going all-in as a left-leaning liberal.

The same can be said for Donald Trump prior to becoming a factor in the 2016 Presidential Elections. He had donated to the Clintons in prior years, but once he issued policies that a large base of Republicans could get behind, Trump not only became relevant, he won.

Can the same happen for Dwayne “The Rock” Johnson in 2024?