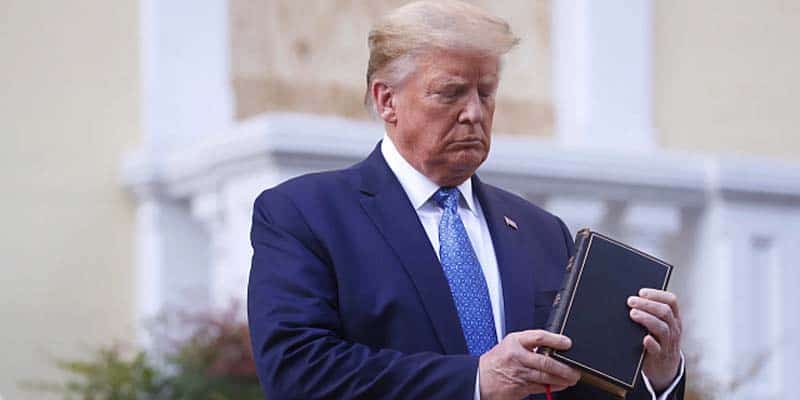 As COVID-19 Cases Spike, Trump Commits Yet Another Twitter Blunder

President Trump’s staff has been working around the clock to prevent him from contracting Coronavirus. It makes sense. The President’s job detail requires him to routinely meet with diverse groups of people from all walks of life.

Donald Trump is in the highest risk factor group, as he is 74 years old, and despite what his public medical reports would suggest, he is not the fittest guy on the planet.

So why is the President ignoring the rising COVID-19 infection rates across the country while taking every precaution possible to avoid the infection himself?

One reason is that he is all-in on his reelection effort. Political pundits will have to search far and wide to find any positive indicators regarding his reelection odds, and Trump is panicking.

He should panic. His campaign is in a three-month-long nosedive, and his standard operating procedure is no longer working to galvanize his base.

Over the weekend, Trump found the time to retweet a video of some of his supporters from The Villages, a retirement community that has locations in central and south Florida, a state that he narrowly won in 2015.

Toward the beginning of the video, one of the supporters can be clearly heard shouting the words “white power” in response to a protester asking where the former geriatric’s “KKK hood” is. Though not exactly a compelling example of one-sided racism, retweeting it was a tactical blunder.

In a rare “admission” of error for Trump, the retweet was deleted hours later, according to CNN.

The damage was already done, however, and while there may be the possibility that Trump was not aware of the racist comments contained in the video, Presidents are held to a higher standard. At least, this one is.

If we cannot trust a President to properly vet the content they share (i.e. their message), then what exactly can we trust them to handle on a larger scale? That’s what many voters are asking themselves today.

Another blunder for the Trump administration was the insistence that churches reopen in late May. Many places of worship have followed this advice, and now these facilities sport the highest infection rates for Coronavirus outside of nursing homes.

The older Christian demographic is a key source of votes for Donald Trump, so why would he insist that they convene together and spread the contagion? Has he offered a recommendation that will potentially kill off portions of his voter base?

All of these signs point to one direction: Desperation. The President is literally grasping at anything to rescue his reelection efforts, and his poll numbers, as well as his reelection betting odds, seem to drop another notch with each attempt.

What once was a commanding lead in the betting odds for Donald Trump has now flip-flopped, with Joe Biden currently holding a sizable advantage.

Unlike Trump, Biden is taking the Coronavirus seriously, wearing a face mask and keeping a low profile in regard to large public gatherings.

Trump has recently begun to refer to his competition as Hidin’ Joe Biden, a reference to his sparse appearances since the outbreak began, but the presumptive DNC nominee has taken to Twitter to address the President’s recent posts.

White supremacy should be rooted out and relegated to the pages of history — not promoted by the President of the United States.

Recent polls have Joe Biden leading by 9 points in a nationwide survey. The odds and poll numbers speak volumes if Biden can “hide” and simply let Trump’s reelection chances plummet.

Of course, these numbers can and will change once Biden selects his VP, the campaigns get rolling, and the Presidential debates happen, but this new normal we are living in as a country is uncharted territory.

One can only guess what the political and social climate will offer over the coming months.