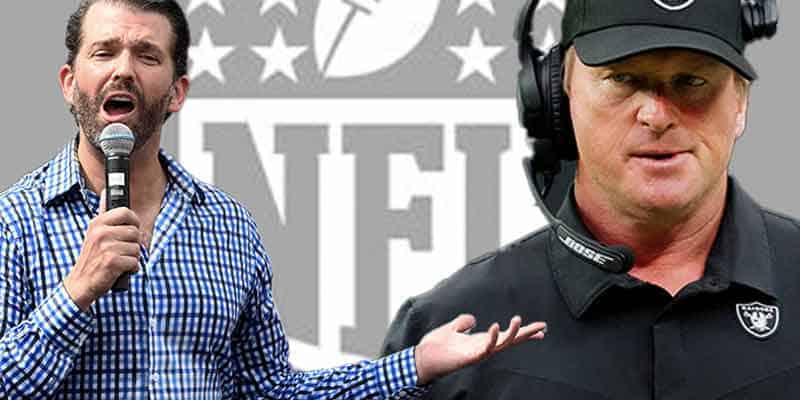 Disgraced former Las Vegas Raiders head coach Jon Gruden had hardly cleaned out his office before an unlikely ally called out the NFL for their arrogant hypocrisy.

Donald Trump Jr., son of the former 45th President of the United States, didn’t mince words when critiquing the National Football League and the general management of the Raiders for their handling of the discovery of a series of emails that Gruden sent over the course of a decade while working for ESPN and the NFL.

While many aren’t sure whether to bet on Donald Trump Jr. to run for President in 2024 or 2028, his sudden uptick in political commentary has some believing he could be poised for a run sooner than later.

Let’s see the emails & texts of Goodell & every NFL owner/exec. We must find out if they’ve ever said anything wrong, shared a controversial thought, or held an opinion that wasn’t PC. No statute of limitations. We can’t allow them to hide behind their white privilege.

Don Jr. employs many of the same tactics via social media that his father did (when his account was still active), moving swiftly beyond the condemnation of the alleged racist, homophobic, and misogynistic remarks sent by Gruden, and instead focusing on the scope of the investigation being too narrow.

Comments like the above tweet are embraced by the same hard-right Republicans that support his father. That backing is further evidenced by Donald Jr.’s current odds at political betting sites for his chances at winning the White House in 2024.

Trump Jr. is currently the 5th leading candidate to secure the Republican Party’s 2024 Presidential Nomination and is the 18th overall odds getter in the Presidential Election odds in three years.

Regardless of Don Jr.’s political intentions, is he right about Gruden and the NFL? Why shouldn’t the NFL make the digital communications of all league personnel part of the public domain?

For starters, secrecy regarding roster moves, schemes, draft picks, or any other strategy related to running a competitive NFL franchise would be exposed, causing for league front office executives to rely solely on verbal communications.

The first amendment may protect freedom of speech in the United States, but that only keeps one from getting sent to jail for sharing their opinion. It doesn’t protect anyone from losing their job, and in a country where the dollar rules and large conglomerates dictate the tone, pink slips are handed out routinely for remarks that don’t align with the corporate status quo.

Don Jr. is calling the National Football League’s bluff because he knows good and well that the private emails of most Americans contain information that is not intended for public consumption.

Translation – when writing an email to a group of trusted friends, language tends to be sharper and more colorful than if one were speaking in front of a national audience.

The reason Trump Jr. knows it is a bluff is that he believes the league is in agreement with him, and that a release of that scale would be certain to implicate a number of NFL employees.

This isn’t rocket science. The same is likely true for most companies possessing two or more employees in the United States.

The best advice this author can give regarding the preparation of text communication is to imagine the email or instant message printed out on a poster-sized exhibit board in a courtroom.

If that thought disturbs you, don’t send the email, text, or letter – especially on a company account!

Something for political gamblers to keep in mind is the potential for Don Jr. to replace his father’s presence in the 2024 Presidential Election Cycle.

The current odds posted for betting on Donald Trump for President in 2024 place him in the lead ahead of Biden and Harris at some online sportsbooks. Will Trump Jr. assume dad’s position in the polls and in the odds if Sr. were to drop out and grant his son clearance?

Considering how astronomical those Don Jr. odds are at the moment, perhaps the time to place a bet is right now.