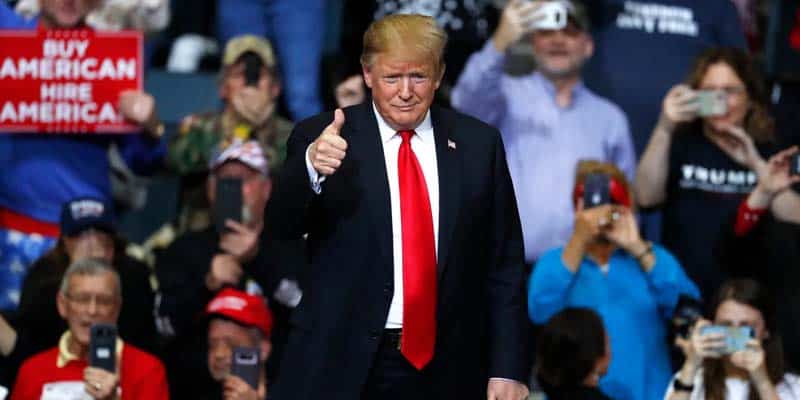 Doesn’t matter — President Donald Trump has a better chance to win re-election in 2020 than either side of the coin.

Oddsmakers have recently updated the 2020 presidential election odds at online sportsbooks, and when combining the average between the top three betting sites, Trump now has a greater than 50% chance to win back the White House next year.

However, MyBookie now has Trump’s odds listed at -150, making these the first recorded odds to push him into the greater-than-50% range, and giving him an implied probability of 60%.

Trump has been the clear favorite since the beginning of 2019. His odds in January were listed at +150, which means he had a 40% chance of winning — an increase of 20% to today at MyBookie.

When using the combined average between the three sportsbooks, Trump has a 53.33% chance of winning re-election next year, which is far higher than anyone on the Democratic side at this stage of the campaign season.

To put that in perspective, former Vice President Joe Biden is his most likely challenger at this time, and when calculating his combined average chance from the betting sites, you get an implied probability of 20.74% — a whopping 32.59% difference between Biden and Trump.

Presently, it’s clear that Trump will be favorite until at least the Democratic Party has chosen their nominee for 2020 or unless something big happens regarding impeachment or any other bombshells.

However, the latter is rather unlikely at this time, and the public money bet on the odds prove that.

Odds still favorite a Democratic candidate winning the White House, but the margin is slim and seems to be closing as we get closer to the first debates which are just three weeks away.

Below you find the current odds for both parties and the odds for each of the candidates running for president in 2020, which have been provided by Bovada.

Which Party Will Win The 2020 US Presidential Election?

Odds To Win The 2020 US Presidential Election