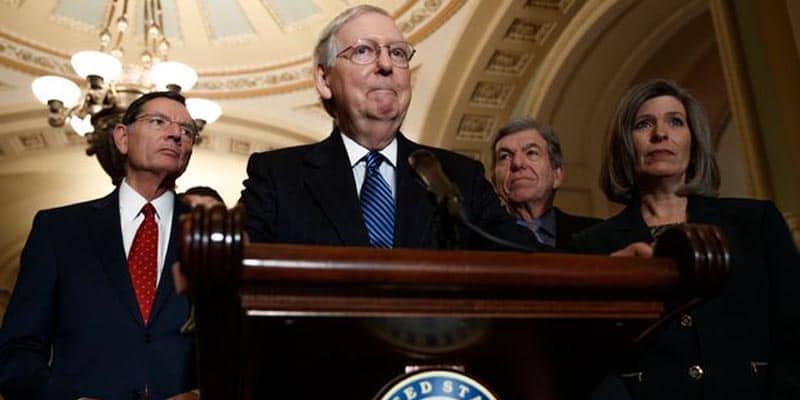 Outside of the presidential election odds, the political futures for which party will control the U.S. Senate will be what determines whether the White House winner can follow through on his or her 2020 campaign promises.

And according to the 2020 Senate election opening odds, it appears the Republicans are favored to keep a majority of seats in the upper chamber of Congress.

At -140 odds ($140 bet wins $100), the oddsmakers favor Republicans holding over 50 Senate seats after the 2020 general election. After determining the probability with a no-vig calculator, we can see this outcome has been given an approximately 53.10% chance to happen.

Let’s dive into the Senate election to see where the race stands today and whether the Republicans will win or lose seats in the upper chamber on Tuesday, November 3, 2020.

Currently, the GOP controls 53 seats in the U.S. Senate, while Democrats hold 45 seats and two Independents caucus with the Democratic Party.

A total of 35 Senate seats are up for election in 2020, which includes two special elections in Arizona and Georgia. The Republicans hold 23 of these seats while the Democrats will have 12 seats on the ballot.

Democrats would need to gain three seats to force a tie-breaker vote from the Vice President or gain four seats to become the majority party. A 60-seat filibuster-proof Senate majority held by either party is doubtful to happen after the 2020 election.

According to the Senate map projection at 270toWin, the forecast shows Democrats may lose one seat (Doug Jones from Alabama) and safely hold 46 seats in total while Republicans could lose three seats, leaving 50 seats marked as safe.

Given that “Under 50 Republican Seats” seems like a longshot, it’s probably a safe bet to pick either Over 50 or Exactly 50 seats for the GOP.

There are four Senate races considered a “toss-up,” which are seats that are up for grabs by either party. Those seats are the following:

Democrats need a lot to go right to pick up all four seats, and because it’s unlikely that all four “toss-up” races will go their way, the best bet at this point in time would be the “Over 50 Republican Seats.”

In other words: The GOP would only need to win one toss-up race for the “Over 50” bet to payout compared to all four for the Democrats for the “Exactly 50” to return an investment.

For future reference, here are all the 2020 election Senate races and the projections for each seat as 2019 comes to a close.

*Seats up for grabs, but indicated if likely to flip or is a toss-up

*Seats marked as “safe” for the incumbent party