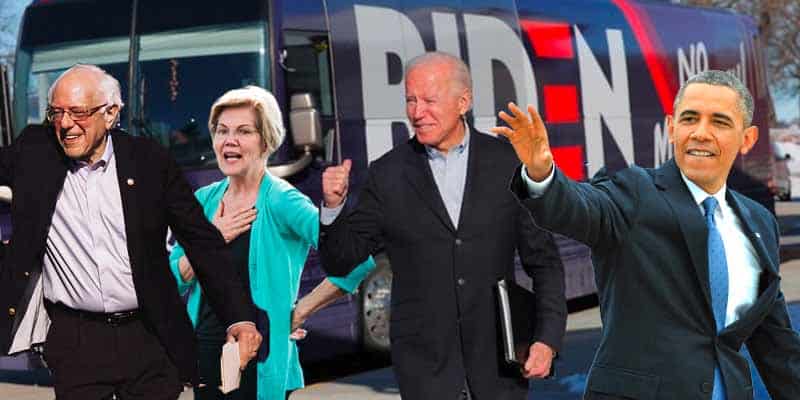 2020 US Presidential Election Odds: Here’s The Deal After Biden Endorsements

In a matter of days, sportsbooks’ betting odds for the 2020 US presidential election have gone from unanimously listing Donald Trump as the favorite to a much more mixed bag now that Democrats are all-in the “No Malarkey!” bus.

But even though the biggest names on the left are officially ridin’ with Joe Biden, the odds still mostly favor American voters to lean right and hop aboard the Trump train on Tuesday, November 3, 2020.

Biden Odds Up After Obama Endorsement

Joe Biden’s President odds for 2020 saw the needle move at only one political betting market after the former Vice President received a string of endorsements from high-profile Democrats over the past week.

Sen. Bernie Sanders and Sen. Elizabeth Warren jumped on the bandwagon, but none were more prominent than the presumptive Democratic nominee finally getting the endorsement from the person who holds a special place in Biden’s heart — and likely the other half of a bromance friendship bracelet.

Barack Obama endorsed Joe Biden for President on Tuesday and brought an end to growing pundit speculation regarding when it would happen. The 44th POTUS said he is proud to back his former VP for the general election after the two held home court at the White House for eight years (2009-2017).

I’m proud to endorse my friend @JoeBiden for President of the United States. Let's go: https://t.co/maHVGRozkX

However, three out of the four leading online sportsbooks still favor sitting President Donald Trump’s reelection odds in 2020, even after Obama’s endorsement of Biden.

BetOnline is the only sportsbook where odds on Biden and Trump are perceived to be tied. However, they also currently offer the most return on investment for a second term won by the GOP incumbent, and Trump -110 indicates that an $11 wager would pay out $10 if he reaches 270 electoral votes.

On the flip side, Bovada is the clear choice for value on the presumed Democratic nominee. Biden +125 is the worst chance given to the former VP but offers the best payout for bettors because a $10 bet would win $12.50 if he becomes the 46th POTUS.

The following 2020 presidential election odds are live and available for wagering at the sportsbooks where noted. The futures for “Biden-Trump” are first, and their implied probability is included. The head-to-head matchup is immediately followed by the full 2020 election boards from each public betting market.

And if you’d like to read about the oddsmakers, check out PEO’s best-reviewed political betting sites 2020. For now, here’s where the sportsbooks stand on the race for the White House.