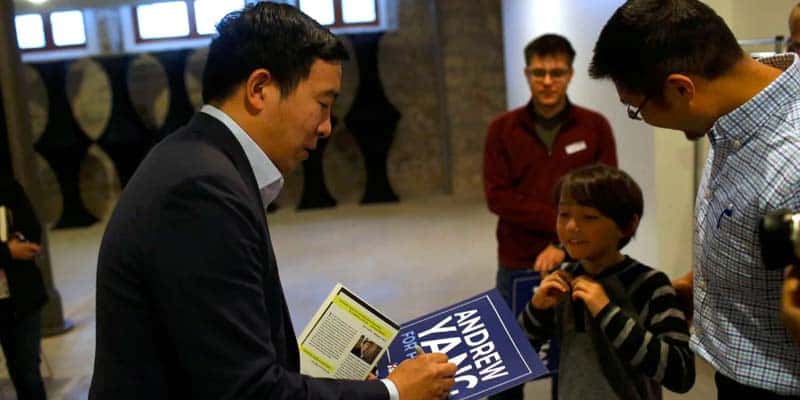 2020 odds analysis: Does Andrew Yang have a chance to become president?

Does Andrew Yang have a chance to win the Democratic nomination and become the next President of the United States?

You bet he can.

To start, Yang has already qualified with 65,000 individual donations that were needed for the first Democratic presidential debate, which today was announced by NBC to take place at the Adrienne Arsht Center for the Performing Arts in downtown Miami on June 26 and 27.

Ever since his appearance on the Joe Rogan podcast, Yang has turned his presidential campaign into mainstream success thanks to his unique platform of Universal Basic Income (UBI) — which would give every individual adult in the US a $1,000 per month income from a VAT directed to curb the job loss expected from automation.

Heck, he’s even got people chanting and cheering “PowerPoint! PowerPoint! PowerPoint!” at rallies after promising to be the first president to use transparent and accurate statistics by using the Microsoft slideshow presentation software as part of the annual State of the Union address at the House Chambers in Washington DC.

But can Yang win the…

Well, to get an accurate picture of what the chances are for #YangGang2020, we’ll turn to the oddsmakers since when there’s money on the line, there’s no tool that’s better than a sportsbook at accurate giving us how likely or unlikely something is to happen.

And for all of the betting odds for Yang’s 2020 campaign, we’ll be using the ones posted currently at Bovada Sportsbook.

Andrew Yang currently sits in 6th place among the candidates who are most likely to receive the presidential nomination Democratic Party, which is awarded to the winner from the primary election season.

His odds are +1400 which means his chances of winning are currently 6.67% (based on implied probability). For Vice President Joe Biden is currently the favorite at +225, which puts his chances at 30.77% to be the party’s nominee.

When looking at the much longer list of potential candidates to win the 2020 presidential election, Andrew Yang is impressively tried for 6th place as well alongside former Rep. Beto O’Rourke and Sen. Elizabeth Warren — not bad for someone who was a no name just a year ago.

So, what are Yang’s chances of winning the presidency during the general election? After all, he’ll likely have to go against President Donald Trump, the incumbent Republican.

Yang’s presidential odds currently are listed at +2000, so when converting to an implied probability, we can see that the oddsmakers believe that he currently has a 4.76% chance of becoming the next President of the United States.

Trump, who is currently the POTUS, unsurprisingly is the favorite since his path toward re-election is viewed by the oddsmakers to be the one of least resistance. His odds are posted at +120, which gives him a 45.45% chance to win the election next November.

While those may seem like they are wide margins — it’s really not.

In fact, Trump’s odds were roughly around +5000 before a single Republican debate was held, which means he had a 1.96% chance of becoming POTUS.

Andrew Yang’s chances are much greater than Trump’s were at this time back in 2015.

And if you’re still doubting his odds of potentially sitting in the Oval Office, then just wait until he gets on the stage next month with all of the other Democrats.

After all, Yang is a nationally-recognized debate champion.

Little known fact about me – I was on the US National Debate Team in 1992 that went to the World Championships in London. If you get me on that debate stage I will deliver. 👍

And once he gets the national spotlight, I predict his chances will skyrocket — meaning you’ll want to place your bet before the value is gone and he potentially takes the lead as the favorite to win either the party nomination, the presidency, or both.