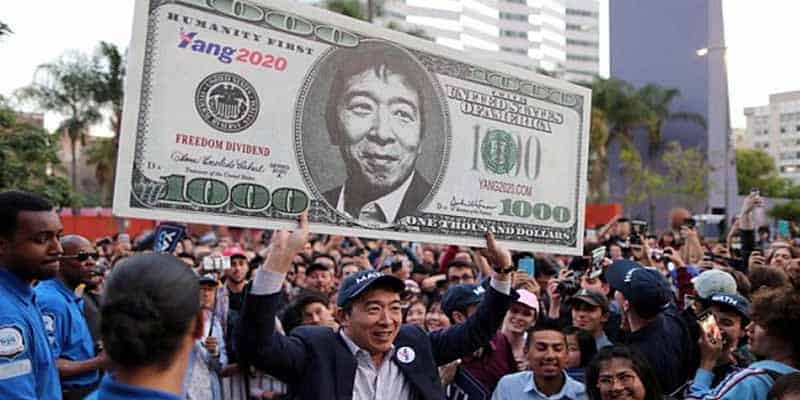 His Freedom Dividend, a universal basic income for all American citizens would be $1,000 per month. But before he can implement this, he must first earn the Democratic nomination.

This is the first time that Andrew Yang, an entrepreneur with a background in economics and law, has broken the top five in the party nomination odds.

And at this rate, it appears Yang is becoming a household name himself.

On Yang’s campaign website, there is a list of “Andrew’s 3 Big Policies.” The first is the Freedom Dividend, followed by medicare for all, and human-centered capitalism. Yang’s healthcare plan focuses on raising the quality of life for Americans while also lowering overall healthcare costs through increased access to preventive care. Yang also advocates for a holistic approach to patient care, examining the mind and body when treating ailments.

Yang’s final big policy is his redefinition of capitalism, branded as “Human Capitalism.” This economic system would value people over money to maximize human welfare. “Our current emphasis on corporate profits isn’t working for the vast majority of Americans,” Yang says on his website.

Instead of completely changing America’s economic system, Yang wants to fix the system currently in place. By providing his Freedom Dividend, universal healthcare that frees employees from work-sponsored plans, and shifting the importance of economics to the workers, Yang is trying to bolster economic growth throughout every part of the country.

It seems that Yang’s message is resonating with Americans. In February, some sportsbooks had his odds as low as +5000. Yesterday, BetOnline listed his odds at +1200. Today, they’re up again at +1000.

With Yang’s February appearance on the Joe Rogan Experience podcast and his devoted supporters known as the “Yang Gang,” there’s a chance this former longshot candidate could become the Democratic nominee.

For comparison, all the Democratic candidates are listed below with their odds from BetOnline.